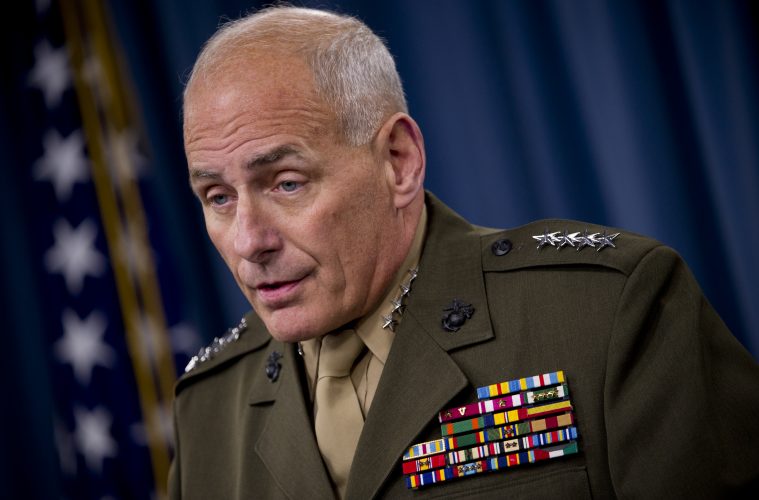 What Does John Kelly Mean For Marijuana?

Kelly served as the head of the U.S. Southern Command, a posting that gave him oversight of U.S. security operations for Central America, the Caribbean, and the entirety of South America. Trump settled on Kelly in part for his Southwest border expertise, according to people familiar with the deliberations.

In that role, General Kelly grappled with issues relating to the international illicit drug trade and the flow of narcotics, including heroin and cocaine, from countries in the Southern Hemisphere to markets in the United States.

Donald Trump has said that drugs are coming over the southern border “at a record clip,” and that building a wall along that border will help address the opiate epidemic in places as far away as New England.

Trump’s notions of cross-border drug trafficking aren’t supported by the latest federal data, which show drug seizures falling along the southwest border in recent years. And General Kelly’s own views on the flow of drugs are considerably more nuanced than Trump’s.

In an interview with the Military Times earlier this year, Kelly acknowledged that addressing the opiate epidemic is more an issue of decreasing demand for drugs here at home than it is a question of cutting off the supply of drugs in the countries they originate from.

“For years and years and years we’ve been encouraging [South American] countries to do more” to combat the drug trade, Kelly said. “And of course they say, ‘Well, why don’t you do more to stop the demand for drugs?’… So if you’re a Latin American, and we’re harping on them to do more to stop the flow of drugs, they say: ‘Wait a minute. As we look north, the real problem is the demand.’ ”

For years, federal drug policy focused on reducing the supply of illicit drugs via tactics like destroying crops like coca, poppy and cannabis. Reformers have long argued that these tactics are ineffective so long as demand for drugs remains high, and that federal dollars are best directed toward treatment and education initiatives that reduce the demand for illicit drugs.

Kelly cited state and federal anti-smoking efforts as a successful example of how to reduce the use of drugs. “The solution,” he told the Military Times, “is for Americans to stop using drugs. Now, you’re never going to go to zero, but we’ve got great programs to convince Americans not to do things – or to do things. We’ve got great anti-smoking programs. I think when I was a kid a pack of cigarettes was 25 or 30 cents, and 70 percent of Americans smoked. Now I think it’s 23 percent and, of course, it costs you a million dollars to buy cigarettes.”

Crucially, authorities never tried to reduce tobacco use by outlawing cigarettes, arresting smokers, or destroying tobacco crops in the field.

Kelly is, however, critical of marijuana legalization. He calls the plant a “gateway” to harder drugs (this notion is disputed by many drug abuse researchers and the National Institute on Drug Abuse). He does support the use of medical marijuana, however: “I’m not a doctor,” he told the Military Times, “but I’m told it has a medical use. So whether it’s veterans or anyone else, if it helps those people, then fine. Medicine is medicine.”

Kelly’s nomination would be the third Trump cabinet pick who’s an outspoken critic of marijuana legalization. Attorney General nominee Jeff Sessions has been harshly critical of legalization efforts, arguing that “good people don’t smoke marijuana.” Georgia Rep. Tom Price, Trump’s pick to run the Department of Health and Human Services, has been one of the most reliably anti-marijuana members of Congress in recent years, voting against even modest reform bills.