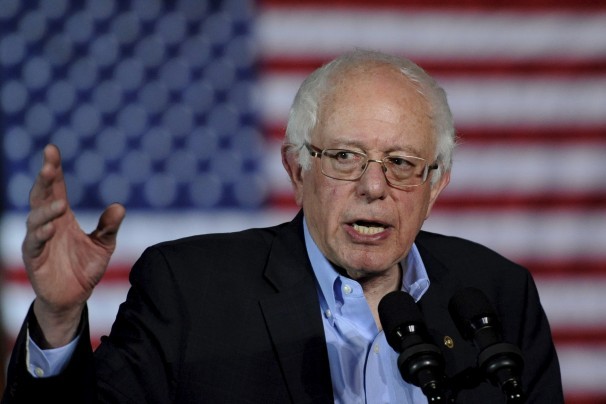 ‘We’ve got to rethink the so-called War on Drugs’: Sanders goes pro-pot in California

Bernie Sanders is turning to marijuana to bolster his credentials in California ahead of the crucial Democratic primary there.

The Vermont senator told a rally in beach-front Santa Monica that he would vote yes on an initiative proposed for the November ballot in the state that would legalize the drug. In Riverside, he told more than a thousand people that the 40-year U.S. war on drugs has been unfairly targeted minorities, He told more than 5,000 people in San Bernardino on Tuesday that as a senator he has worked to remove marijuana from Washington’s list of the most dangerous drugs. On Wednesday in Cathedral City he carried on with the theme.

For Sanders, California and the 475 delegates at play in the June 7 primary there are crucial for his attempt to close the gap with front-runner Hillary Clinton before the Democratic convention in July.

The marijuana issue plays to Sanders’ sweet spot: the youth vote, which has been a crucial voting bloc that to 74-year-old’s insurgent challenge to Clinton.

“Right now under the federal controlled substances act, marijuana is listed as a schedule one drug right next to heroin,” he told the crowd at an armory in San Bernadino. “People can argue, and scientists argue, the pluses and minuses of marijuana. But nobody I know believes marijuana is equivalent to a killer drug like heroin.”

Sanders hasn’t always given the topic such full-throated support. In March, he told a Michigan crowd in March that he’d smoked marijuana twice in his life, but on his website claims it made him cough and “it isn’t quite my thing.”

For all of the newfound focus pot, however, Sanders doesn’t appear ready to embrace one of the drug’s most prominent supporters. Longtime marijuana activist and actor Tommy Chong took to Twitter on Monday to vent frustrations after he said Sanders had disinvited him as an introductory speaker at a rally in East Los Angeles.

“It’s lip service to get the votes, but they don’t want to endorse what I stand for and what I’ve stood for all my professional career,” Chong told the Hollywood Reporter on Tuesday. “It was an insult.”

California 20 years ago became the first state to legalize medical use of marijuana. Now advocates are pushing to make recreational use legal. To date, four U.S. states and the District of Columbia have made marijuana legal through voter referendums and Sanders has said he supports other state-level efforts to do so. He’s also called or treating addiction as a medical issue, rather than a problem to be addressed through the criminal justice system.

With or without pot, Sanders is facing an uphill climb in California and in the chase for the Democratic nomination. Clinton leads Sanders by 9.5 percentage points in the average of four polls conducted in the state that was compiled by Real Clear Politics.

Clinton also has the overall advantage in the race. The former secretary of state, has 2,305 delegates to 1,539 for Sanders, with 2,383 needed to secure the nomination, according to tallies by the Associated Press that include superdelegates — party leaders and elected officials not formally bound to any candidate.

A February poll by the National Organization for the Reform of marijuana laws found 60 percent of likely California voters backed legalizing the drug. That survey found support was strongest among voters 18 to 34, with eight-in-10 of them saying they would vote yes.

“We have got to rethink the so-called War on Drugs,” Sanders said. “Here is the truth about what we know: that is that over the last 30 years millions of Americans have received criminal records for possession of marijuana. That becomes a racial issue, because while blacks and white do marijuana in equal rates, blacks are four times more likely than whites to be arrested.”