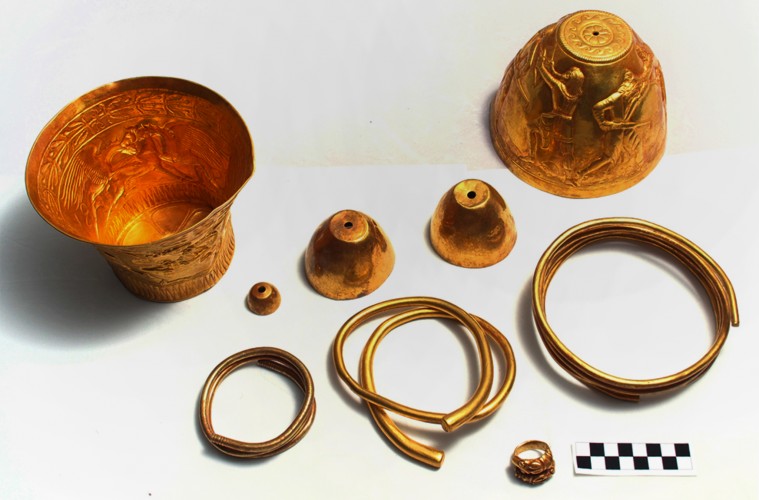 Want to see what a bong looked like over 2,000 years ago?

Thanks to some amazing archeologists, we know that our forefathers were getting high as far back as 4,500 years ago. But how did they actually smoke? A new archeological dig has revealed a solid gold vessel that seems like it may have been a bong.

The grave belongs to a group called the Scythians who roamed Europe and Asia for hundreds of years. The Greeks and Persians knew them as drug-fueled warriors who left nothing behind but their grave mounds, known as kurgans. One of these kurgans is where this solid gold bong was found.

The kurgan was found in Southern Russia in the caucasus mountains. The archeologists found, under a thick layer of clay, a solid gold object that was thousands of years old.

“We weren’t expecting to find anything like this,” Andrei Belinski, the archeologist in charge of the dig, said. “It was definitely a surprise for us.”

They found two bowl pieces, three cups and a ring amongst other piece of jewellery. The total wait was over 3 kilos, which is a lot of gold. The archeologists later realised that all the pieces look like they seemed to fit together, and had a resin like substance on the inner walls.

Tests showed that both opium and marijuana resin was found on the inside of the gold vessel. The Scythians were using the vessel to pass around in order for a ritual. It is possible many more artifacts could be found under kurgans, but as the 21st century marches forward, it is likely that many will be covered up, and we may never really know about the culture of marijuana and other drugs in ancient times.