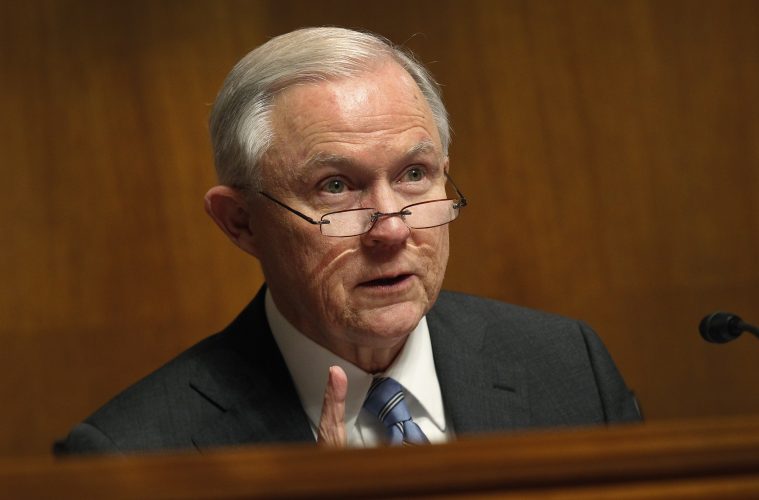 President Donald Trump and his advisers are privately discussing the possibility of replacing Attorney General Jeff Sessions, and some confidants are floating prospects who could take his place were he to resign or be fired, according to people familiar with the talks.

Members of Trump’s circle, including White House officials, have increasingly raised the question among themselves in recent days as the president has continued to vent his frustration with the attorney general, the people said.

Replacing Sessions is viewed by some Trump associates as potentially being part of a strategy to fire Special Counsel Robert Mueller and end his investigation of whether the Trump campaign coordinated with the Kremlin to influence the 2016 election, according to the people, who spoke on the condition of anonymity because they were not authorized to comment publicly.

The president took another swipe at Sessions on Monday, calling his attorney general “our beleaguered A.G.” and asking why Sessions was not “looking into Crooked Hillary’s crimes & Russia relations?”

Trump’s suggestion, too, that his top law enforcement official investigate a former political rival is astounding, and even his allies have said in the past that such a move would be unheard of in the United States. Trump, after the election, had backed away from the idea of possibly prosecuting Hillary Clinton.

Sessions’ tight relationship with Trump and the White House has unraveled since he recused himself in March from the Russia probe. The president had privately complained about that decision for weeks, and in an interview with the New York Times last week he said he would not have appointed Sessions as attorney general had he known that Sessions would do such a thing.

After Sessions recused himself, he passed on the responsibility to Deputy Attorney General Rod Rosenstein, who then appointed Mueller as special counsel overseeing the Russia investigation.

Trump could order Rosenstein – and then Associate Attorney General Rachel Brand – to fire Mueller. If they quit instead of doing so, he could appoint an acting attorney general who would. Trump could also appoint an acting attorney general with them in place – effectively passing over Rosenstein and Brand – and order that person to remove the special counsel.

Trump’s authority to jump Rosenstein and Brand, though, is murky. The Justice Department has issued opinions in the past saying that such a move is and isn’t permissible. And his pick for an acting attorney general would have to have Senate confirmation and be serving elsewhere in the government or have worked in the Justice Department for 90 days within the past 365 and be at a certain senior pay level.

Another scenario is that Trump could make a recess appointment, said Steve Vladeck, a professor at the University of Texas School of Law. Under that plan, Trump could choose an attorney general during the August recess who would serve until the end of the next Senate session, which could be early January 2019. That person would have the same authority as someone who is confirmed by the Senate, Vladeck said.

Among the names being floated as possible Sessions replacements are Sen. Ted Cruz, R-Texas, and former New York mayor Rudolph W. Giuliani, according to people familiar with the conversations.

Giuliani dismissed a report mentioning his name as a possible attorney general and told CNN that Sessions “made the right decision under the rules of the Justice Department” to recuse himself. He did not return a message seeking comment.

In a statement released late Monday, Cruz said he was “deeply gratified that we have a principled conservative like Jeff Sessions serving as Attorney General. The stories being reported in the media tonight are false. My focus is and will remain on fighting every day to defend 28 million Texans in the U.S. Senate.”

But not all in Trump’s orbit share the view that Sessions’ days are numbered.

Anthony Scaramucci, the new White House communications director, told CNN on Monday afternoon that Trump and Sessions “need to sit down face-to-face and have a reconciliation and a discussion of the future.”

Former House speaker Newt Gingrich, R-Ga., a vigorous Trump ally, said in an interview that he and Trump had talked about Sessions and that Trump had indicated “he was very unhappy both with the recusal and the fact that Jeff didn’t talk to him beforehand.” But Gingrich said he would “strongly oppose” the firing of Sessions, because “I think his base likes Sessions.”

“His base thinks that on things like [violent street gangs] and sanctuary cities that Sessions is doing a fine job, and I think his base would be confused,” Gingrich said.

“He said he’s beleaguered, not failed, and he is a little beleaguered,” Gingrich said. “This whole thing has been a mess.”

Trump, though, continues to let Sessions twist in the wind. One person close to Trump said the president asked him about how firing Sessions “would play in the conservative media.” Trump also asked him whether it would help to replace Sessions “with a major conservative,” the person said.

For his part, Sessions shows no signs of stepping down.

On Friday, Sessions traveled to Philadelphia to meet with law enforcement officials. In his speech, he vowed to crack down on illegal immigration and on “sanctuary cities” that are not communicating with federal authorities about undocumented immigrants. He spoke of how hard he is working, despite having none of his U.S. attorneys in place and most of his senior officials still not confirmed by the Senate.

“I do my best every day,” Sessions said, “to fulfill the goals the president and I share.”

Several of Sessions’ Republican former colleagues on Capitol Hill have defended him in the face of the president’s criticism.

He also encouraged the president to try to patch up his relationship with his attorney general.

“They’re both adults, and they can work it out,” Cornyn said.