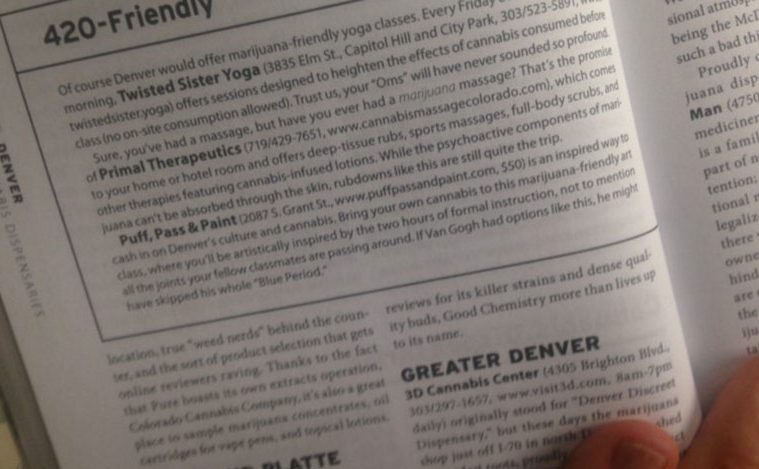 The ever-crowded travel guidebook industry has plenty of challenges — including keeping establishments’ information up to date and presenting vibrant and current opportunities for a wide cross-section of general-interest tourists without crossing lines of taste or politics.

But the Avalon Group, publisher of the Moon and Rick Steves travel guidebooks, made a bold decision in putting together its latest edition of Moon Denver, Boulder & Colorado Springs. The new book, written by Mindy Sink and released in May, includes multiple sections on marijuana tourism in Colorado’s most tourist-friendly cities.

Moon says it’s “the first general-interest travel guide to be published with marijuana tourism included in its listings,” and as far as we can tell, they’re telling the truth.

“Colorado has the oldest and most established recreational marijuana retail network in the U.S.,” Avalon Group publisher Bill Newlin told The Cannabist, “and both tourism statistics and guidebook sales to the state have been rising sharply over the past year.”

Moon tapped journalist Joel Warner, the marijuana writer at the International Business Times until earlier this week, to pen the cannabis segments. The information is bright, current and relevant including shops and 420-friendly events in the areas.

It’s a smart, if brave, move for Moon, which has always read younger than its competitors Fodor’s and Frommer’s. Even though cannabis is legal in Colorado and a handful of other states, it remains federally illegal. And even though public opinion is now firmly rooted on the side of marijuana legalization, it remains a controversial issue among much of the American public.

We talked with Newlin about Moon’s future 420-friendly plans for Colorado and other states — and about how he firmly believes that legal cannabis has played a legitimate role in Denverand Colorado’s thriving tourism numbers.

The Cannabist: This is a big first step. But do you think you might add more pages dedicated to the topic of cannabis in the next edition?

Bill Newlin: Our coverage is already quite substantial, and it’s doubtful it would increase in subsequent editions. Right now it’s presented under its own topic heading, but over time it might be incorporated into our Entertainment and Shopping listings, depending on the establishment.

Cannabist: Did Moon include marijuana tourism information in any of its updated guides for other legal markets — Seattle or Portland or Anchorage or D.C.?

Newlin: No, because those markets aren’t nearly as developed as Denver/Boulder, although we expect they will all mature substantially in the next year or two. As marijuana establishments become a normal part of the tourism landscape, like bars or specialty food shops, we’ll include them in our coverage.

Cannabist: You’re an expert in tourism. Do you think tourists take legal cannabis into consideration when picking a destination?

Newlin: Yes, since all our data indicates that travel and tourism to Colorado has increased relative to other states since recreational marijuana was legalized.