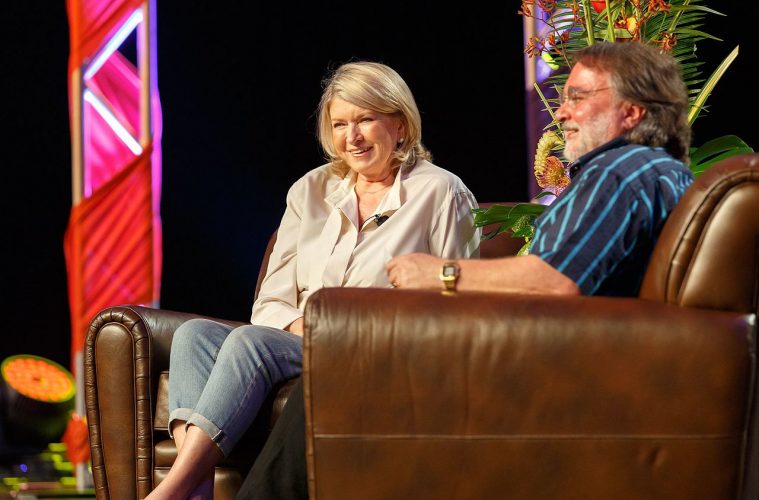 Here are some of the things Martha Stewart has done on her new show with Snoop Dogg: She has worn a blinged-out cheese grater on a chain around her neck. She has drunk out of what can only be described as a pimp cup. She has taste-tested a stoner recipe for a pizza omelet. She has name-dropped Escoffier. She has not flinched when Rick Ross said to her audience, “I wanna make some noise for Martha because baby got back.”

When did Martha Stewart go from being America’s most earnest homemaker, ready at a moment’s notice to spray-paint silk flowers and shape them into elaborate wreaths, to being America’s coolest grandma, who makes weed jokes and hangs out with Wiz Khalifa?

After she went to prison, of course, but not right after. The cultivation of New Martha, of Hip-Hop Martha, of Martha the Queen of Dank Memes, took time. And it has culminated in “Martha and Snoop’s Potluck Dinner Party,” her cooking-show-meets-stoner-buddy-comedy that enters its second season Monday on VH1.

“I’m a very strait-laced person,” Martha told The Washington Post. “I don’t smoke, I hardly drink. It’s kind of an odd combination right from the get-go.”

Respectfully: Is Martha all that strait-laced anymore?

It’s the perception that she is strait-laced that makes it funny just hearing her say the names of her guests, often hip-hop artists: “We had Lil Yachty. Do you know him?” This is, after all, the same woman who wrote an extensive blog post about bathing her donkeys: Billie, Rufus and Clive. It’s the same woman who, in a roast of Justin Bieber, delivered a withering monologue calling comedian Natasha Leggero “the dirtiest used-up ho I have ever seen,” and gave Bieber tips for when he “inevitably” goes to prison. If you ever slept on a set of Martha Stewart floral print sheets, you’d be surprised to hear her joke about them, which was: 1. unprintable, and 2. directed toward the rapper Ludacris.

Her show with Snoop is a very particular cultural exchange between two people of seemingly disparate backgrounds, which is a thing America could use more of these days, frankly. Martha tries on a grill, shotguns a beer and glugs out of a 40-ounce bottle of malt liquor this season. Snoop, meanwhile, has learned about lobster thermidor and croquembouche.

“She’s taught me how to … have better food etiquette, how to be more professional in the kitchen,” Snoop said. “I showed her a few things, the ghetto way of doing things,” like his method for making bacon.

“I’ve learned a lot about music from Snoop and our guests,” Martha said. “He’s extremely knowledgeable, he’s also very amusing. He’s really laid back,” she said, quoting one of his songs. She genuinely likes rap: “Ever since I saw ‘8 Mile.’ It started with Eminem … I like that kind of poetry.” And Rick Ross: “We’re email pals.”

Snoop is becoming Martha, and Martha is becoming Snoop, and it’s been happening for years, before our very eyes. He first appeared on her show in 2008, putting cognac in his mashed potatoes, teaching her the phrase “fo shizzle.” A year later, they made brownies with green sprinkles and a wink and a nod, because those green sprinkles stood for an altogether different green substance. Then a Reddit Q&A in which Martha said Snoop was a person she would like to get to know better, and then the Bieber roast. After that, SallyAnn Salsano, who also produced “The Jersey Shore,” realized that they would be the perfect odd couple for a cooking show.

“These guys are genuinely friends, and that’s why I think it works so well on screen,” Salsano said. “Their relationship is real.”

Some of the show’s best comedy comes from how Snoop and Martha play off each other when she says something contrary to type or he eats something delicious. Snoop will look at her and say, “Martha,” amused and awed. There is recipe instruction, but it’s not really about that. The format is basically: Snoop and Martha each make dishes according to a (usually stoner-friendly) theme, like tacos or grilled cheese, and invite celebrity guests over to hang out. This season will feature Laverne Cox, RuPaul, T-Pain, Ty Dolla $ign and P. Diddy, among others.

Snoop is, unsurprisingly, high for every episode.

“He comes onto the set pretty high, and leaves pretty high,” said Martha, laughing, but he’s “not incompetent or incoherent at all. That’s the way he lives.”

And then he has some cocktails, because many episodes kick off with Martha demonstrating a drink recipe.

“Every episode I was drunk. Every one,” Snoop said. “The lines become that much more easier, the flow becomes natural. It’s more relaxing. You’re not doing a job, you’re just having fun.”

Martha is having fun, too. She seems cannily aware of her role as the comedic straight man, the person who can send Jamie Foxx into peals of laughter by sucking on a helium balloon, as she does during season two’s “Birthday Party” episode, while misquoting Migos’s “Bad and Boujee”: “Rain drop. Drop top. Smoking on kush in hot box.”

Martha was once so earnest that her daughter, Alexis, hosted a show poking loving fun of her mother. Ana Gasteyer’s “Saturday Night Live” impressions of her were of a woman with a quiet rage within. People didn’t know Martha was funny – much less that she could go toe-to-toe with some of the filthiest comedians. It’s been in her all along, said Kim Miller-Olko, senior vice president of television and video for Sequential Brands Group, one of the show’s producers.

While “It’s not like she’s a truck driver,” the Bieber roast “was who she is when you’re in the car with her. That sense of humor is very much her,” she said.

Martha wouldn’t describe her sense of humor as dirty.

It’s all so funny that a cynical person might wonder if this is a calculated effort to expand her brand among millennials. After she published an essay about how much she loves drones, the Daily Dot wrote that Martha was “trolling the internet into oblivion.”

“The internet’s oblivion or my oblivion?” asked Martha, when I read that line to her. “I can’t imagine what that means.

“Trolling means you’re fishing, it means you’re dragging a line … so it doesn’t really make any sense, that statement, does it? Does it to you?”

I tried to explain that the internet has a different definition of trolling, and that in this context, the word meant being cheekily provocative. And I wondered: Was Martha trolling me?

“No, I’m doing a fun show,” she said. “We’re having interesting guests, we’re doing all sorts of great, I would say funny things. We’re trying to give people a little bit of information and a lot of enjoyment.”

For all their odd couple dynamic, Martha and Snoop aren’t so different. They’re both lifestyle gurus – Snoop has a cannabis company with artful packaging, a digital media company and a series of apps. They’re both rich people who live in fancy homes, attended to by staff. When they appeared on “$100,000 Pyramid,” Martha grilled Snoop on the intricacies of interior design: wainscoting, sconces, credenzas. He answered every question correctly.

At one point a meme went around, a picture of Snoop and Martha from the holiday brownie episode of her show, clad in a three-piece suit and a holiday sweater, respectively. The caption reads: “Be mindful of stereotypes! Only one of them is a convicted felon.”

Except it’s not true: Snoop, too, is a felon, having been convicted of drug possession and possession for sale in 1990.

But it’s the spirit behind that meme that is the force of the show: Anyone can find common ground over a good meal, even two people who seem so different.

Snoop is writing his own cookbook, one more thing he’ll have in common with Martha. It will feature recipes from the show.

“People were inquiring about those dishes, and how can we do it. I was like, you know, (expletive) it, I’m gonna do a cookbook.”

It’s going to be refined: “I didn’t put no baloney sandwiches in there. That might be in my second book. That might come with the hood recipes in there too,” he said. “I wanted … (people) to know that it was good and coming from a cooking perspective, and not just me just doing it to be doing it.”

And it won’t be about cooking with cannabis.

“I’m gonna be on cannabis while I’m cooking, but ain’t no need to put it in the food.”

Martha says she doesn’t consume cannabis, though she says she has gotten a contact high from being around Snoop. He has gifted her with marijuana seeds, and she hasn’t yet planted them, but is considering doing so at her Maine household (“I need to find out if I need a license.”).

Even though it would seem the ultimate culmination of both personal brands, Snoop and Martha have no plans to launch the most logical merchandising spinoff of their show: a line of gourmet cannabis edibles.

“I’d rather do a line of my own hydrangeas or my own tulip bulbs,” she said.