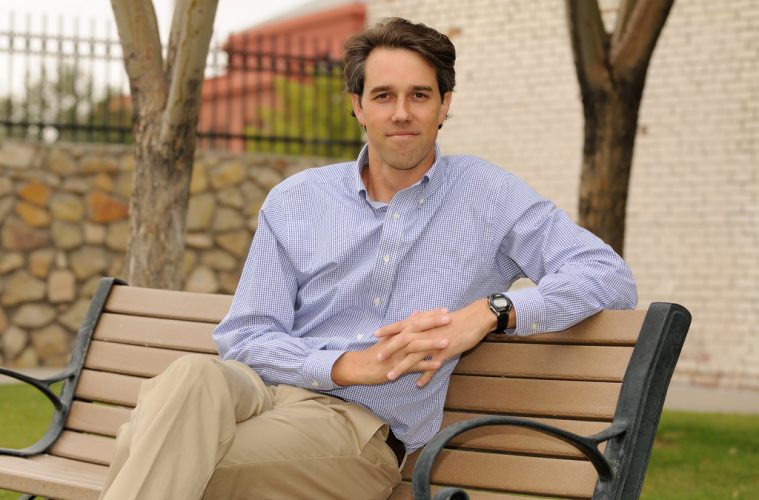 Democratic Texas Rep. Beto O’Rourke kicked off his longshot bid to unseat Republican Sen. Ted Cruz on Friday, vowing an unscripted and unconventional campaign that could catch voters’ imagination at a moment when Democrats are eager to go on offense against the Trump administration.

“We need to meet this fear, this anxiety, this paranoia that’s coming out of the White House — that’s gripping so much of this country — with a strength and a confidence that can only come from Texas,” O’Rourke told enthusiastic supporters at a rooftop rally in his hometown of El Paso.

The 44-year-old third-term congressman is the kind of rising political star Democrats hope can help begin turning red Texas blue, aided by a booming Hispanic population and state politics pushed even farther right by Trump and Cruz. He first made a name for himself playing guitar for Foss, an El Paso rock band that included drummer Cedric Bixler-Zavala, who went on to play for the Grammy Award-winning act The Mars Volta.

He has advocated for legalizing marijuana and wrote a book decrying the federal government’s war on drugs. On Friday, he talked about the opioid addiction crisis sweeping much of the country, noted that many states have stopped filling prisons by “locking up marijuana convictions” and said, “We have an opportunity to end this failed war on drugs.”

Picking off Cruz would be a formidable challenge in Republican-friendly Texas, where no Democrat has won statewide since 1994, and O’Rourke will be the acknowledged underdog in the race. He pledged to campaign without pollsters, consultants or PAC money, and may have trouble getting much attention from a national party focused on defending 10 Senate Democrats who are up for re-election next year in states Trump won.

But O’Rourke said he was fine going forward without help from national Democrats, saying he would take his campaign straight to Texas voters. And with Republicans in control of the Senate 52-48, and scant pickup opportunities for Democrats, he argued that anyone interested in Democrats taking back the Senate majority should pay attention to his race.

“Playing defense, while important, is not going to turn people on, it’s not exciting, it’s not going to capture anyone’s imagination,” O’Rourke said in an interview with The Associated Press shortly after his announcement. “What’s exciting is taking back the Senate, and as far as I can tell the only way to do that is through Texas.”

Such an approach could allow O’Rourke to tap into some of the grassroots energy and small-dollar donations that fueled Bernie Sanders’ presidential campaign. He recently got attention for going on a 36-hour bipartisan road trip from Texas to Washington with GOP Rep Will Hurd when a snowstorm canceled their flights. They livestreamed much of the journey, causing an internet stir while enduring traffic jams, making fast-food runs and expressing mutual opposition to Trump’s proposed border wall.

O’Rourke said the attention the road trip garnered was a sign of voters’ hunger for a bipartisanship that’s increasingly rare in Washington.

The congressman speaks fluent Spanish and switched between it and English in his kickoff speech, pledging support for “comprehensive immigration reform” and opposition to Trump’s refugee travel ban. He talked about wooing both Democrats and Republicans in Texas, and his support for congressional term limits.

O’Rourke took shots at Cruz, who finished second to Donald Trump in last year’s Republican presidential primary, saying the state needs a “senator working full-time for Texas” rather than “serving his own interests” running for president and helping lead a government shutdown in 2013.

In response Cruz said: “I welcome him to the race, and will continue to work every day to earn and keep the trust of Texans across our great state.”

But in a fundraising email to supporters, Cruz’s campaign made clear the coming lines of attack, deriding O’Rourke as an “unabashed liberal” without “any record of achievement, and a progressive ideology out of touch with the majority of Texans.”

O’Rourke was elected to the El Paso City Council at age 32 but remained little-known until the 2012 Democratic primary, when he stunned eight-term Rep. Silvestre Reyes, a former House Intelligence chairman.

O’Rourke was arrested in 1995 for breaking and entering after jumping a fence at the University of Texas at El Paso during what he now says was a prank, but prosecutors declined the case. Three years later, O’Rourke was arrested for drunken driving and received deferred adjudication to avoid conviction, an incident he has called a mistake.

O’Rourke also may end up facing a primary challenge since fellow Rep. Joaquin Castro is also weighing a bid.