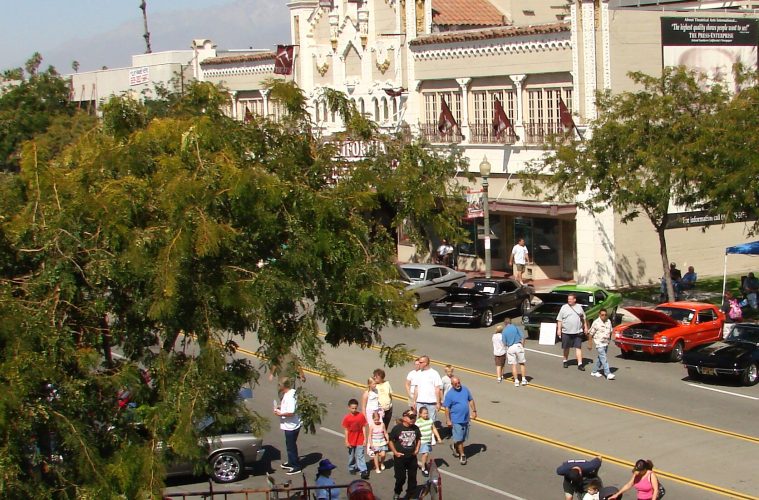 More than nine months after residents voted to allow medical cannabis businesses in town, city officials have approved a dispensary permit for the location now occupied by Flesh Showgirls.

That permit has since been appealed, city spokeswoman Monica Lagos said. And folks at the gentlemen’s club aren’t talking.

But Roger Jon Diamond, an attorney who represents the aspiring dispensary owner, said he believes they’re ready to set up shop on Hospitality Lane despite ongoing legal challenges.

“The city has not asked for an injunction,” Diamond said. “We have a clear pathway to open.”

The measure requires the city to allow dispensaries — as well as other types of marijuana businesses — at locations at least 600 feet from residential zones and meeting other requirements. There are four sites that meet those requirements, including Flesh Showgirls, according to a March memo from Community Development Director Mark Persico.

That memo came after months had passed without San Bernardino officials making permit applications available. As a result, Diamond sued the city March 9 on behalf of several clients, including the man who spearheaded Measure O.

“Measure O said the city clerk was supposed to prepare the form to allow someone to apply for the permit,” Diamond said. “But the city just kept saying, ‘We need more time.’”

The city had at first said it would take time to rewrite the development code to comply with Measure O. Then when two lawsuits challenged the measure’s legality in February, City Attorney Gary Saenz advised holding off implementation until those lawsuits were decided.

But before any of the cases were set to go to trial, San Bernardino’s Community Development Department started passing out dispensary applications in June. Lagos said they issued their first permit on Thursday, Aug. 24 to SB License 01 LLC, which is registered to the Flesh Showgirls address at 100 W. Hospitality Lane.

The gentleman’s club is owned by Randy Welty, who’s been involved in marijuana dispensaries and legalization initiatives throughout Southern California for years.

Diamond said Ye is the manager of Flesh Showgirls. He directed all questions about operations – such as when the shop might open and whether it might take over a portion or the entirety of the strip club’s space – to Ye at the club.

A man who identified himself both in phone calls and in person as the club’s manager declined to comment. He said he wasn’t Ye, but wouldn’t offer his name.

It’s common for dispensary owners, who’ve often been working to secure permits for months, to open their doors almost immediately after receiving the green light from their local city. But a week after receiving its dispensary permit, 100 W. Hospitality Lane remains a strip club.

The online marijuana directory Weedmaps lists 18 unlicensed dispensaries and another 16 rogue marijuana delivery services in San Bernardino, despite years of efforts to enforce a ban that some city officials described as “futile.”

DeAguilera represents clients who backed Measure N, a legalization initiative that competed on the ballot and lost out to Measure O. They’re among parties suing the city over the winning ballot measure, arguing that the locations identified by Measure O don’t mesh with San Bernardino’s governing blueprint for land use. And in his appeal of the dispensary permit for Flesh Showgirls, DeAguilera said he simply attached that lawsuit.

“Clearly, the general plan of the city of San Bernardino does not envision marijuana being sold from a strip club on Hospitality Lane,” he said.

The club, represented in court by Diamond and known at the time as the Flesh Club, battled the city for roughly 20 years.

In 2004, the club won a $1.4 million judgment against the city for profits lost during a four-year closure. Three years later, a judge found sex and lewd conduct routinely occurred at the club and ordered it to close. It reopened in 2009 as Flesh Showgirls.

In the past 12 months, San Bernardino police have recorded 15 calls for service at the address. Six of them resulted in a report being taken, for calls ranging from battery to a man with a gun, according to police records.

If a store opens soon, San Bernardino will be the second city in the Inland Empire to permit marijuana dispensaries.

The city council for Adelanto, in the High Desert near Victorville, also voted in May to allow up to four medical marijuana shops. Applications are being accepted through Sept. 14, and City Manager Gabriel Elliott said they’d received seven as of Aug. 30. After the deadline passes, Elliott said a city council-appointed committee will vet the applications and choose four using criteria set by the committee and council.