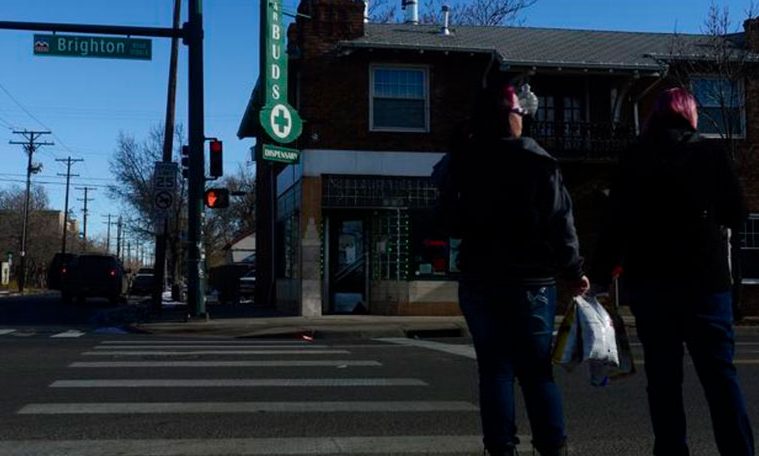 Starbuds, a marijuana chain that grows plants on the second floor of its recreational shop at 4690 Brighton Blvd., plans to appeal the decision by Stacie Loucks, the executive director of the Denver Department of Excise and Licenses. In her decision, Loucks agrees with a hearing officer’s earlier findings that the grow operation’s odors and other effects conflict with a new aspirational neighborhood plan for working-class Elyria-Swansea.

But Brian Ruden, one of Starbuds’ owners, says more is at risk than Starbuds’ small grow operation in a matter being watched by Colorado’s marijuana industry.

“The truth is that this is a David v. Goliath fight,” he said. “And this is an attack against the industry, not just Starbuds,” by neighborhood activists and the city.

At an April hearing, Elyria-Swansea advocates including Drew Dutcher, Nola Miguel and Paul Andrews — president and CEO of the nearby National Western Stock Show — testified that Starbuds’ presence was frustrating attempts to bring positive change to the area.

The location also is arguably sensitive for neighborhood advocates and city officials because it sits at a high-profile corner adjacent to an area the city seeks to transform through the $1.1 billion National Western Center project.

The renewal hearing was requested under city regulations that allow residents to voice opposition to licenses in industrial mixed-use zoning districts. The testimony led hearing officer Suzanne A. Fasing on May 10 to recommend that Loucks deny the annual renewal for Starbuds’ retail cultivation license.

“It’s good that the protections that City Council put in place did what they were supposed to do,” said Miguel, the director of LiveWell, a program that focuses on health issues in the neighborhood. “People who live near this in Elyria-Swansea deserve to not have 240 plants in their backyard.”

Elyria-Swansea also is among the most industry-saturated neighborhoods in the city, though Ruden says Starbuds has heard plenty of support from locals.

But it made an easier target since, according to Miguel, all other marijuana grows within neighborhood boundaries are on purely industrial-zoned land where cultivation is automatically allowed, so renewal hearings aren’t an option.

Starbuds disputes the neighbors’ claims about the grow’s impact as well as interpretations of zoning issues made by Fasing and Loucks. That includes whether its zoning permit allowed plant husbandry on site and whether the city grandfathered the cultivation appropriately.

Ruden says he has paperwork ready to show Starbuds disclosed its intent to cultivate marijuana — not just to sell it — when it obtained a zoning use permit for the site in 2013.

The chain’s ability to supply its store there isn’t in jeopardy, since Starbuds grows at other locations. But Ruden said the owners “will take this as far as we need to.”

Their next appeal option is to seek judicial review of the decision in Denver District Court, according to Dan Rowland, a spokesman for the Excise and Licenses Department.

Faced with complaints about odors at the April hearing, Ruden voiced a willingness to take greater measures to control any smells.

But Loucks wrote in Thursday’s decision that Starbuds “was aware of the problem last year and did nothing to work with the neighbors at that time. It is difficult to believe that anything will be different this year. The testimony and evidence presented indicates that the Applicant’s facility causes adverse effects on nearby properties, the Applicant had notice of those effects, and the Applicant failed to remedy the harm.”

The decision says Starbuds cannot begin growing any new plants or clones at the site and must wind down cultivation and harvesting in the next 30 days, when the license ends.