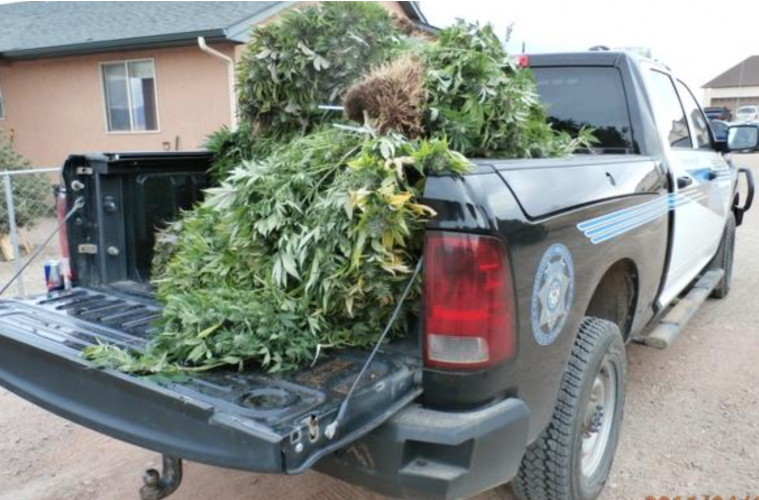 Pueblo County authorities say they have made their eighth recent bust of an illegal marijuana grow operation, finding 79 plants at a home inhabited by two Russian immigrants who recently moved to southern Colorado.

The county sheriff’s office said the Pueblo West raid Sunday in the 1500 block of West Tejon Avenue followed a tip from the public.

Olga Berina, 25, and Evegnly Groshikov, 43, each face charges of illegal cultivation of marijuana. Investigators say the pair, who were living in New York until moving to Pueblo, had been renting the home where the marijuana was found since January.

“No arrests were made but deputies have referred the case to the Pueblo County District Attorney’s office for the filing of felony drug charges,” the sheriff’s office said in a news release.

Investigators say they believe Berina and Groshikov were growing the plants with the intent of transporting them to New York for sale. The plants are estimated to be worth $67,000 to $268,000, depending on where they are sold, according to the sheriff’s office.

Authorities say the home’s electrical system had been altered so much, a Pueblo Regional Building inspector deemed it a hazard and the house unsafe to occupy.

Sheriff’s deputies confiscated 67 of the 79 plants, allowing the residents to keep 12 plants — or six per person — as permitted by Colorado law.

The sheriff’s office says since March 30, they have seized about 2,4000 illegally grown marijuana plants from seven separate homes, including six in Pueblo West and one in south Pueblo County. Nine men, all originally from Florida, have been arrested in connection with the grows.

Another one of those cases included two other men originally from Cuba who had recently moved to Pueblo from Florida. They allegedly  had 127 illegally-grown marijuana plants and materials to expand their operation at the Pueblo West home they were renting.

An investigation into whether there is a connection between the two cases involving the Cuban immigrants is underway.

In nearby Huerfano County,  a man was killed in mid-March while trying to break into the home of two Florida residents that authorities say were illegally growing 400 marijuana plants.

“If you are complying with Amendment 64 and the rules and regulations of Pueblo County, then you have nothing to worry about,” Sheriff Kirk Taylor said in a statement. “But if you’re not complying, then you need to worry.”