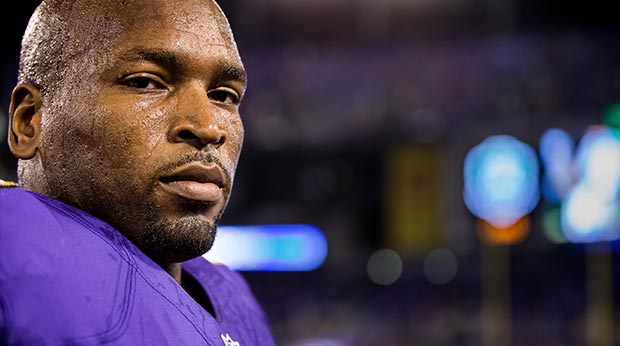 When the Ravens selected Ronnie Stanley in the first round of the draft, Eugene Monroe’s status as the team’s left tackle was put in doubt. The 29-year-old played only six games last season because of a shoulder injury that required surgery in the offseason and he was held out of organized team activities.

But the Ravens’ decision to release him Wednesday became much more than a simple football decision.

Monroe is the first active NFL player to support research of cannabidiol, even donating $80,000 to studies of its potential benefits for players.

The Ravens made it clear they did not support his stance on the issue, devoting two paragraphs within the team’s own news story of his release on his advocacy of medical marijuana, insinuating it factored into the team’s decision:

Monroe had surgery to repair a torn labrum (shoulder) this offseason, and used the time off to become the first active NFL player to openly campaign for the use of medical marijuana. The Ravens did not rally behind the cause.

“I promise you, he does not speak for the organization,” Head Coach John Harbaugh said this offseason.

Monroe, however, responded Thursday morning with a statement via Twitter:

“I will not be returning to the Ravens this season. It’s never easy moving on — I love Baltimore and its fans — but this is all part of the game. Despite the current uncertainties, one thing is for sure: whatever happens in terms of my professional football career, I will never stop pushing for the League to accept medical cannabis as a viable option for pain management. I will do everything I can to ensure the generations of NFL players after me won’t have to resort to harmful and addictive opioids as their only option for pain management. I’ve been working hard this offseason to recover from my injuries. I am cleared to play and excited to get back on the field and compete.”

“These are tough things,” Harbaugh said. “These are the difficult situations in our league. I have the utmost respect for Eugene Monroe. Family man. Nobody works harder. As a football player and as a person, he’s just a wonderful guy.

“Then the other tough part about it is the speculation that the people want to throw in there, just making statements that really have no basis in fact or reality whatsoever. But people will believe what they want to believe. You just got to move past that and know things are done for the right reasons and keep the relationships intact. And with Eugene, they’re firmly intact. He’s got a lot of friends here, he’s well thought of here and (we all) appreciated what he did while he was here.

“Football circumstances changed, from the end of the season until now. Football circumstances. One hundred percent football circumstances. That’s it. That’s all it ever was. … This organization has always been very forward-thinking, very open, very in front of all kinds of issues and has always allowed their players to speak out, speak their mind, be who they are. … I think it speaks well for who (owner) Steve Bisciotti is and we always allow people to be who they are and believe what they believe and stand up for what they believe in. That doesn’t have anything to do with any football decisions that are ever made.”

Monroe, in Colorado Springs last Friday for the Realm of Caring’s annual fundraising golf tournament, said he was on a conference call with league officials earlier this month about the research studies for CBD. The call, he said, was a positive first step in gaining the league’s attention on the issue, but it wasn’t enough.

“I do hope that the NFL recognizes this being a serious subject,” he said. “I’ve seen recently there was news they changed the rules on players wearing hoodies on the field. We have time for that but not time to take care of our players’ health and longevity? We need to prioritize our healthcare and reform our policies.”

Monroe said he has never taken CBD or marijuana because it’s on the league’s list of banned substances. Players are penalized if they test positive for more than 35 ng/ml of urine of tetrahydrocannabinol (THC), the psychoactive compound in cannabis. Although CBD has only trace levels of THC, consuming it poses a risk that Monroe said he isn’t willing to take.

“It’s hard to read how beneficial CBD is and not be able to take it, knowing that all of the symptoms that I’m experiencing as an athlete could potentially, or will, be remedied because it’s happened over and over again for people all over our country,” he told The Post in March.