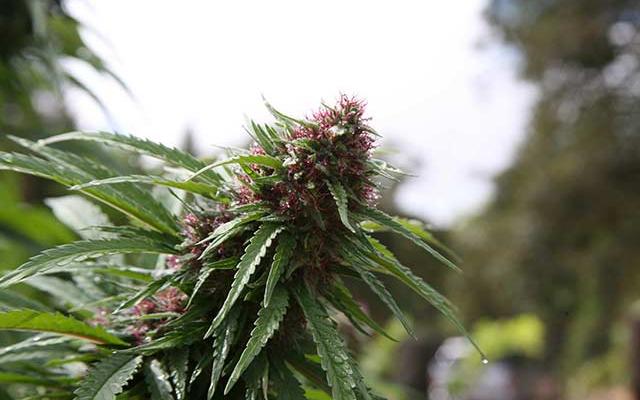 Brooke and Rodney Smith opened their Portland, Oregon cannabis dispensary, PDX Tree, in November 2014 – the same month Oregon voters approved a ballot initiative for legalizing recreational marijuana. While they were excited to enter what they hope will be a lucrative experiment in entrepreneurship, they say the state’s fluctuating policies, as it transitions from medical marijuana into recreational sales, have been a headache.

In order to get started, the Smiths had to pay the city for both a medical and recreational license – $3,500 and $4,795 annually – plus an additional $4,750 licensing fee to the state of Oregon. Because their store caters to both patients and potheads, they’ve also had to navigate the rules on the potency and amount of marijuana they’re allowed to sell, depending on whether it’s medical, edible or recreational.

“This was the hardest thing I’ve ever done,” said Brooke Smith. “Our personal finances are all screwed up; our credit cards are maxed … We love what we do, but it definitely hasn’t been a cakewalk.”

The Smiths joined the Oregon Cannabis Business Council to seek guidance on the process, but they say they’re the only African American members. Brooke participates in a number of cannabis organizations and has never run into another African American who owns a marijuana-related business. She only knows of one other dispensary in Portland that is black-owned. The reason for the scarcity, she said, has to do with education and missed opportunity.

“The reality today is that we’re not well educated on how to handle our personal finances,” said Smith, who used to work as an insurance agent before moving into marijuana. “Our parents didn’t pass this down to their kids, so we’ve had to figure it out without a lot of support and backing.”

The legal marijuana trade is booming in Oregon. The government has collected more than $25m in sales taxes so far in 2016, according to the state’s Department of Revenue. With a 25% tax on the stuff, that translates to more than $100m-worth of weed sold so far. But a range of cultural, educational and legal barriers may have kept minorities from cashing in.

Support for minorities who want to enter the budding trade could come in the form of a new 3% sales tax on recreational weed in Portland, a ballot measure that will be voted on in November. Oregon will tax marijuana at 17% starting in January, and the additional 3% tax aims, in part, to help people of color in launching their own innovative small businesses.

The Portland lawmakers behind the bill project that the additional tax could bring in at least $3m per year, part of which would go toward assisting neighborhood minority-owned businesses of any type, in the form of incubator programs, management and job training and financial support. The accrued tax revenue would also be funneled into drug and alcohol education and treatment programs, public safety investments and supporting women-owned businesses. Finally, a portion would go toward a grant program for people who want to expunge past marijuana-related charges from their criminal records but who can’t afford the hefty legal fees involved.

“There’s a myriad of things in that legislation that can help our communities of color,” said Jesce Horton, the Portland-based owner of both a cannabis cultivation facility and a line of gourmet edibles who co-founded the nonprofit Minority Cannabis Business Association (MCBA) last year. “But it’s really about us making sure we come together and apply for those funds, and put ourselves in a position to take advantage.”

Horton’s group wants to help Portland’s people of color benefit from the tax funding by encouraging them to enter the weed business. But he recognizes that it could be an uphill climb for some. As a 1,000-member nationwide organization, only 10% of MCBA members actually work in the cannabis industry, according to Horton. Most are trying to find a way in. And in Portland, Horton only knows a few African Americans who are proprietors of pot.

In the absence of hard data on minorities in the legal weed market – one of the few available estimates pegs minority involvement in dispensaries at 1% nationwide – the MCBA is currently working on a study with the University of California, Berkeley on the demographics of the cannabis industry.

But Horton, who helped Portland commissioner Amanda Fritz draft the language of the proposed 3% tax, believes the lack of people of color in legalized marijuana has to do with heavy regulation, barriers to accessing capital and gaps in the right information.

Furthermore, among minorities in Portland, working in legalized cannabis comes with its fair share of taboo. “People are a little bit scared of jumping into the industry first and knowing that, looking at statistics, they may be the first to get arrested or they may be putting themselves or their families in jeopardy,” Horton said.

Black people are 3.7 times more likely to be arrested for marijuana possession than white people, despite comparable usage rates, according to the American Civil Liberties Union (ACLU). And the decriminalization of marijuana may not do much to change the imbalance. For example, the Colorado Department of Public Safety revealed that, shortly before marijuana was legalized there in 2014, the number of white teenagers arrested on marijuana charges in the state decreased by 8% between 2012 and 2014, the most recent years for which data is available. Yet for black teens, the arrests increased by 58%, and for Hispanics by 29% during the same period.

The ACLU of Oregon said that while it doesn’t yet have statewide numbers on marijuana arrests or citations since legalization in July 2015, it’s interested in learning whether Oregon will follow Colorado with a persistent racial disparity in marijuana violations.

“My guess is we will see something similar here, as there’s evidence that racial disparities exist across the criminal justice system, and marijuana legalization won’t correct that larger issue,” said Sarah Armstrong, communications and outreach director of the ACLU of Oregon.

While marijuana is now legal in designated quantities in these states, many past offenders still have cannabis convictions tainting their records, ultimately road-blocking them from moving on with their lives.

“There are an awful lot of people with marijuana offenses that are struggling because they have that on the books,” said Oregon state Representative Lew Frederick, who in 2015 proposed legislation that would allow a person to submit a request to have his or her record cleared of a marijuana possession. “They then get can’t jobs, they can’t get houses or education, they can’t apply for business loans,” he said.

That’s something that Fritz hopes Portland’s proposed marijuana tax can abate through a grant program for those who need assistance paying the $1,000 or more in legal fees it can cost to expunge the past cannabis charges from their records.

“My understanding is that when the ballot measure passes, it will be the first in the nation to designate some of the money to correct past inequitable actions in the criminal justice system,” said Fritz.

Donald Morse, director of the Oregon Cannabis Business Council, said he’s all too familiar with the drill of expungement. He’s still dealing with his own record after a raid of his dispensary back in 2012, when authorities accused him of selling pot for recreational use, a practice that was then illegal. He and his co-founder accepted a plea bargain for felony drug possession charges, and eventually reopened their dispensary in Portland.

With only a handful of minorities on his council, Morse said he would definitely get behind the 3% cannabis tax. “If we can earmark funds to make loans to help persons of color get a leg up and be their own business owners, I think that’s the right thing to do.”