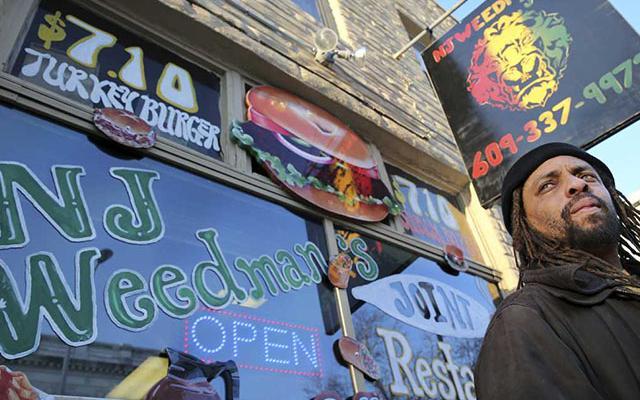 Two establishments with marijuana friendly policies in Trenton, NJ were raided by the local authorities yesterday. One of the establishments was a religious organisation and another the restaurant NJ Weedman’s Joint, run by legalization activist Ed ‘Weedman’ Forchion.

The religious organisation – The Liberty Bell Temple 3 recieved a visit from the Country Narcotics Task Force yesterday. The Trention Police Department also provided support in the operation that arrested several people, though only two of the nine arrested are being held on drug charges.

The seven people arrested for non drug offences were all arrested for outstanding warrants. The police seized a dog as well as vehicles from the property. Debi Madaio, Forchion’s business partner said most of those arrested were released that evening. Forchion will be released today on a $70,000 bond. She stated that drugs were not being sold out of the restaurant or church.

NJ Weedman’s Joint opened last June, and has had problems with Trenton police ever since.

“We’re the center for activism here,” Madaio, a registered nurse who has a son with disabilities, told High Times. “I started this business from a medical point of view.”

Forchion had recently filed a lawsuit against Trenton after the city shut down Liberty Bell Temple 3. The church was shut down due to a city ordinance that makes operating certain establishments after 11pm a crime.

New Jersey Governor Chris Christie is a virulent anti decriminalisation campaigner. Though he passed a bill allowing for medical marijuana legalisation, he has only recently been a proponent of medical marijuana.

Possession of a joint is still punishable by up to six months in jail and a $1000 fine in New Jersey. Madaio made a statement on the events:

“Christie and everybody here, they’re so anti-marijuana. Even for medical marijuana. I’m a nurse, I have a lot to lose, and they’re making things up and acting like we’re drug dealers when we’re not.”

“There’s nothing in Trenton — there’s murders, there’s homeless people. We’re doing something positive, and just because it has something to do with marijuana we get shut down. No matter what we’re not going away.”