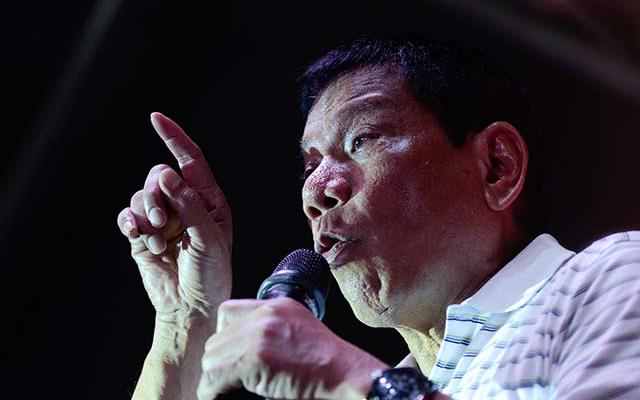 Rodrigo Duterte was sworn in as president of the Philippines on June 30, and wasted no time in launching a foul-mouthed tirade threatening to unleash a reign of terror against drug users. After a staid inaugural speech at the presidential palace, he made a visit to a poor district of Manila where he expounded on his real agenda—and even called upon citizens to take the law into their own hands and kill “drug addicts.”

AFP news service noted this line from his profanity-laden harangue before a crowd of some 500: “These sons of whores are destroying our children. I warn you, don’t go into that, even if you’re a policeman, because I will really kill you. If you know of any addicts, go ahead and kill them yourself as getting their parents to do it would be too painful.”

Duterte won comparisons to Donald Trump on the campaign trail earlier this year for his string of hateful insults, open threats and ugly rape jokes. But he may already have a lot of blood on his hands. In an interview last year, he openly boasted of his links to the notorious Davao Death Squad—a paramilitary network believed to have carried out some 1,000 extrajudicial executions of suspected drug users and miscreants in the city of Davao, where Duterte served three terms as mayor.

In an interview on the matter with the Davao Sunstar in May he upped the ante, pledging that if he became president he would execute 100,000 more criminals and dump their bodies in Manila Bay. Here’s the offending line, in a translation from the Tagalog: “If by chance that God will place me there [the presidency], watch out because the 1,000 [people executed] will become 100,000. You will see the fish in Manila Bay getting fat. That is where I will dump you.”

He also openly taunted Human Rights Watch, has been keeping a running tally of Duterte’s boasts of vigilante justice. In a TV address, he challenged the rights group to follow through on its threat to bring international charges against him. “I will cross examine you until Kingdom come,” he said.

The Philippines Inquirer also noted Duterte’s threat to apply the bloody methods used in Davao nationwide. He told a cheering crowd at one campaign stop: “We’re the ninth safest city. How do you think I did it? How did I reach that title among the world’s safest cities? Kill them all.” (Meaning criminals, apparently.)

President Duterte’s security forces seem to have got the word that it is open season. Incoming National Police chief Ronald Dela Rosa just claimed to have learned from informants that convicted drug lords held a meeting behind bars at National Bilibid Prison (NBP), where they agreed to put up a $1 million bounty on Duterte’s head. When asked how he plans to deal with them, Dela Rosa told the Manila Bulletin: “They should be taken out of the NBP horizontally.”