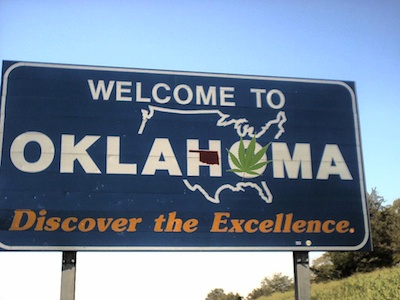 Oklahoma gets ready for marijuana legalization

Oklahomans won’t vote until next year on whether to legalize medical marijuana, but a state lawmaker has already introduced legislation that would set the framework if sales of the drug are approved.

State Rep. Eric Proctor of Tulsa has introduced a measure that’s nearly an exact replica of what’s being considered in neighboring Arkansas, where medical marijuana was legalized by voters last November.

“It’s modeled after the laws in Arkansas,” Proctor said. “It was done intentionally so we can see what (Arkansas) has done right and wrong.”

The bill would task the Alcoholic Beverage Laws Enforcement Commission with adopting rules governing oversight, record-keeping, security and other regulations over the drug, if voters choose to legalize it. The commission’s director, A. Keith Burt, said his department is already stretched thin as new alcohol measures are implemented. He said he will request funding for six new agents this year, but that will be tricky given Oklahoma’s $870 million budget shortfall.

“We’re kind of busy now,” Burt said. “We have a lot of plates in the air. I would say balls in the air, but one of those plates would drop and break.”

Proctor, a Democrat, tells The Journal Record that he introduced the measure so the state is prepared if voters legalize the drug for medical use.

“If they’re not ready, they need to be getting ready,” he said. “It will be happening one way or another. They should be thankful that a bill was filed so they can begin the process of starting to implement it.”