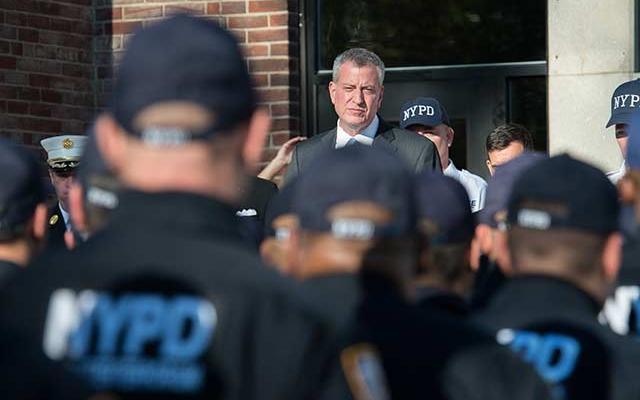 Big Apple tokers exhaled a sigh of relief in November 2014, when Mayor Bill de Blasio instated a new policy barring arrest for possession of under 25 grams of cannabis. New York City had long been the pot bust capital of the USA, and after the new policy the smell of fragrant smoke was present on the city streets on a level not seen since before the get-tough Giuliani era. But now, a year and a half later, a new report released by the Police Reform Organizing Project (PROP) indicates that cannabis arrests rose more than a third in the first three months of this year. The NYPD popped 4,225 people for pot possession between January and March, according to state data crunched by the advocacy group. That’s a serious jump from the 2,960 arrested during the same period last year. When you add in arrests for small sales, the figures are respectively 5,311 and 3,973. What gives?

The trouble ahead was actually spelled out when the policy was announced, with de Blasio and Police Commissioner Bill Bratton playing a transparent game of Good Cop/Bad Cop. De Blasio played to liberals, noting that that a cannabis arrest “hurts [people’s] chances to get a good job, it hurts their chances to get housing, it hurts their chances to qualify to get a student loan.” He also charged that the Black and Latino communities “have been disproportionately affected.” But, as the Daily News recalls, Bratton played the Bad Cop. Those caught with under 25 grams would still receive summonses, he emphasized—and those smoking in public would still be arrested. “It’s still against the law. I’m not giving out Get Out of Jail Free cards,” he said at the time.

There was initially some improvement. The Daily News, not quite accurately, states that “before the law was changed,” post busts had been skyrocketing in the city. In 2014, there were 26,112 cannabis arrests—dramatically dropping to 16,030 the following year. But at the same time, summonses jumped from 13,378 to 17,858. The problem is precisely that the law was not changed—only city policy. The so-called “public view” loophole remains on the books: under New York state law, cannabis in public view remains illegal—despite the decriminalization for simple possession instated in 1977. If suspects can be spooked by cops into emptying their pockets—off they go to jail.  And not just for public smoking, as Bratton misleadingly stated.

And the racial disparity is as entrenched as ever. In 2016, a whopping 86.5 percent of misdemeanor arrests have involved Blacks or Latinos, with fare-beating and cannabis possession or sale the highest categories. PROP’s Robert Gangi stated it flatly to the Village Voice: “The hard truth is police have always fucked over people of color. And the so-called reforms they’ve enacted are virtually meaningless in terms of practices on the ground.”

Edwin Raymond, an NYPD veteran now involved in a class-action suit against the department over quota-based policing, told the Voice the problem is that cops are being used to “generate revenue” for the city coffers. Allen St. Pierre of the National Organization for the Reform of Marijuana Laws (NORML) laid the blame with Bratton, who he accused of enflaming a 1930s-style “reefer madness” panic. He told the Voice: “Mr. Bratton sounds remarkably unenlightened regarding marijuana in general. When I compare him to my chief of police here in Washington, DC, Cathy Lanier, it’s like night and day. Think about what Bratton said just last week about marijuana use—it was just ridiculous.”

In case you missed it, last week Bratton told local radio show “The Cats Roundtable” that cannabis is the cause of the “vast majority” of violence in New York City, even suggesting that the herb is as dangerous as heroin. But DEA chief Chuck Rosenberg himself countered that “heroin is clearly more dangerous than marijuana.” The NYPD did not respond to the Voice‘s request for comment..

Efforts in Albany to close the loophole in the law are ongoing, and the New York City Council last year officially called upon the state to legalize. These are signs of progress, to be sure. But recall that even in Colorado, racial disparities in arrests for public cannabis use have persisted post-legalization. Even with the rise of legalization, we still have a long way to go toward real normalization of the cannabis plant—and uprooting endemic racism.