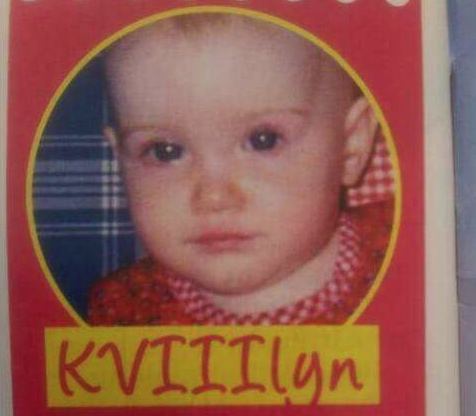 Mother Gives Her Baby The Most Ridiculous Name Yet

How do you say that? Along the lines of ‘kvullin’, right? Maybe inspired by Cthulhu. Or possibly an abstract homage to kevlar, that useful synthetic fibre used to strengthen body armour.

But if you agree with that, you’re wrong. It’s actually a popular girl’s name, just spelled somewhat differently than we’re used to.

Baby KVIIIkyn’s mum, identified only as Mavis, wrote to a magazine proudly discussing her parenting choice. ‘I’ve always loved the name Kaitlyn but hated how popular it was,’ she said.

‘So, when I found out I was having a girl, my husband suggested we replace the ‘ait’ with the Roman numeral symbol for 8.

‘Now our daughter is truly unique!’

Well, she definitely won’t need to worry about someone else in the register having the same name at school (written down, at least).

But that POOR kid when she tries to spell her name for the first time and doesn’t manage it until several years after all the Sams, Jens and Anns of the world.

It was posted on Imgur with the caption simply: ‘Surely a form of child abuse?’

In Australia, parents are banned from including numbers in their children’s names.

Perhaps that is why KVIIIlyn was not christened the relatively simple K8lyn.

What do you think – is the name grVIII?