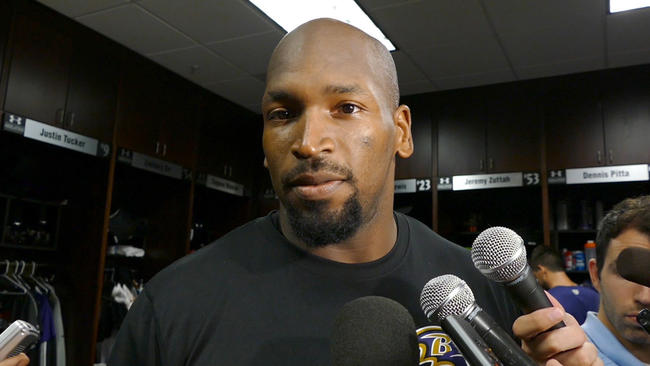 Until he was released from the Baltimore Ravens this year, Eugene Monroe was the NFL’s foremost advocate for allowing players to use medical marijuana. Now he’s a partner in a company suing Maryland regulators for rejecting its application to grow the drug.

Monroe and other officials with Green Thumb Industries said at a news conference Tuesday that they were unfairly — and illegally — denied a lucrative license to grow medical marijuana.

But they also said they don’t want the lawsuit they filed on Monday to further delay the long-beleaguered program.

“I played a long career in the NFL, suffered many injuries, and I’m a Maryland resident that looks to use cannabis as therapy,” said Monroe, who was released from his $37.5 million contract in June. “I don’t want to see this drag out longer, too.”

Last month, the Maryland Medical Cannabis Commission said it expects medical marijuana to become available to patients in the summer of 2017, four years after it was legalized.

Since then, the program has become embroiled in controversies that threaten additional delays, including objections to the lack of racial diversity in companies approved to grow and criticism of a last-minute reshuffling of applicants to spread cultivation sites around the state.

Green Thumb Industries, an offshoot of a Chicago-based medical marijuana grower with associated dispensaries in Massachusetts and Nevada, put in one of the 15 highest-ranking applications to grow medical marijuana in Maryland.

But regulators denied licenses to Green Thumb Industries and another company, Maryland Cultivation and Processing, to make room for lower-ranked growers in underrepresented areas.

Regulators say their approach was the fairest way to follow the part of the medical marijuana law that calls for geographic diversity among cultivation sites.

But the commission earlier had advised applicants that their choice of location would not be relevant for the initial application stages and that they didn’t need to show geographic diversity.

“You don’t change the rules after the game has been played, and yet that’s what’s happened here,” Monroe said.

The company is seeking expedited review by a Baltimore judge to force the commission to give them a preliminary license. But Green Thumb Industries says it will not try to stop other marijuana companies from operating while their litigation is pending.

The commission and the state attorney general’s office have declined to comment on the suit.

But Buddy Robshaw, the vice chairman of the commission, told The Washington Post this month that the commission was saying that the precise addresses of grow sites were not necessary when it told applicants that location “is not relevant.”

He said regulators later asked what counties growers wanted to operate in as a way of ensuring they were balanced throughout Maryland.