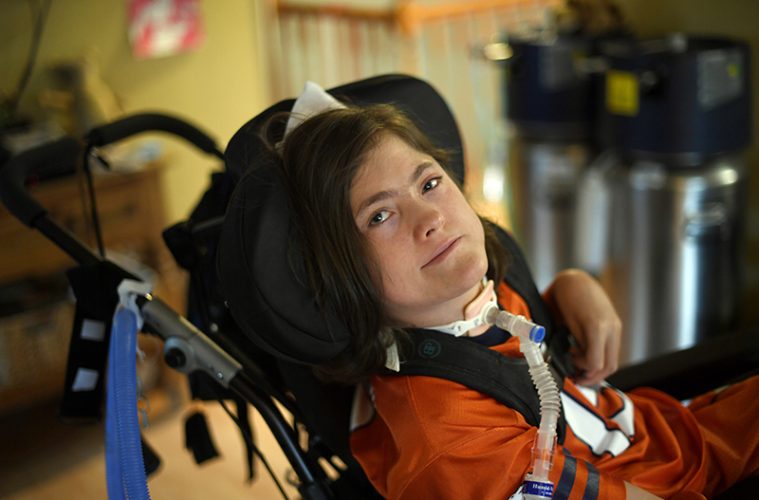 Jack Splitt was a charmer, a flirt and a fighter for the right to open Colorado school doors for medical marijuana treatments for eligible students.

But most of all, the 15-year-old, who died Wednesday, was a good son and a role model for his younger brother, Cooper, their mother said Thursday. Stacey Linn also said Jack, who battled cerebral palsy and the brutal pain that accompanied it, came to Cooper in a dream early Wednesday, hours before his death.

“He was standing tall and in a powerful voice told Cooper, ‘Please do not be sad. I am free,’ ” Linn said.

Later that day, Jack died. He left behind a legacy in state marijuana law and a huge gap in his family.

“He fought hard for children everywhere, there is no doubt,” Linn said, “but we’ll also remember his smile.”

Jack’s work in the state legislature to turn around perceptions of medical marijuana was nearly unmatched, say lawmakers and advocates. Splitt was the inspiration behind “Jack’s Law,” which requires schools to allow parents to provide medical marijuana treatment to their children on school grounds. The law became official this summer.

Splitt’s work at the legislature helped win the hearts and minds of all lawmakers, said the law’s sponsor, state Rep. Jonathan Singer.

Jack and his mom began to fight for a change after a school employee ripped a skin patch that was delivering cannabis-derived medication off his arm in February 2015. They helped get a law passed in 2015 to allow schools to create policies to permit a student’s use of medical marijuana, but none did.

This year, they lobbied for a state law requiring schools to allow a parent or caregiver to administer medical marijuana on campus. Teri Robnett, founder of Cannabis Patients Alliance, doubts “Jack’s Law” would be on the books today if not for the boy.

“Oftentimes we know that there’s an issue that needs to be addressed, but when you have a sympathetic face that can really bring focus to the issue, you can really do amazing things,” Robnett said. “And that’s what Jack did.”

“Jack’s Law” was signed by Gov. John Hickenlooper in June.

“You watched how even his facial expressions can change liberal and conservative lawmakers’ minds,” Singer said. “The biggest case in point: When we passed Jack’s Amendment (in 2015), one of the conservative lawmakers came up to me a day after and said, ‘Jonathan, I came into this hearing expecting to vote against your bill, and tonight I’m talking to my constituents about why I voted for your bill.’

“This year when Jack came back to the same committee to help pass Jack’s Law, the very same lawmakers were so thrilled to see him, they couldn’t contain themselves. They all said on the record how glad they were to see him, and so many of them will be crushed. … I can’t change minds that quickly, but he could. And he didn’t even need to use his words to do it.”

Jack started classes at Wheat Ridge High School last week and was enjoying learning and being with his friends. But Wednesday, he stayed home because he wasn’t feeling well, Linn said.

Splitt suffered from debilitating muscle contractions and dealt with the pain by using cannabis-derived treatment. They worsened Wednesday, and he succumbed, his mother said.

“Jack had a tough life, but he was a trouper and a very, brave young man,” she said. “When he smiled at you, it changed your life. I’ve had people tell me that when Jack smiled at them a year ago, they can still remember his smile.”

Amber Wann is a family friend and a supporter of Linn’s Cannability Foundation, a major force behind “Jack’s Law.” Her son Benjamin, who turns 15 Friday, has epilepsy and they treat it with medical marijuana.

“At first meeting Jack, it’s his smile that speaks volumes,” Amber Wann said Thursday. “To talk with him and say hi to him and have him look you in the eye, it was his handshake to you, his way of welcoming you to his world, and as simple as that may seem, it honestly meant the world to have Jack smile at you. It meant the world to us.”

Jack’s only relief came through his daily medical marijuana treatments, which allowed him to relate better to his family and friends, some of whom he knew since elementary school, Linn said.

“Jack’s Law” gives Colorado school districts the authority to write policies for where on campus the treatments can take place and what forms of cannabis can be administered. If a school district does not create a policy, parents and private caregivers have no limitations on where they can administer the treatment.