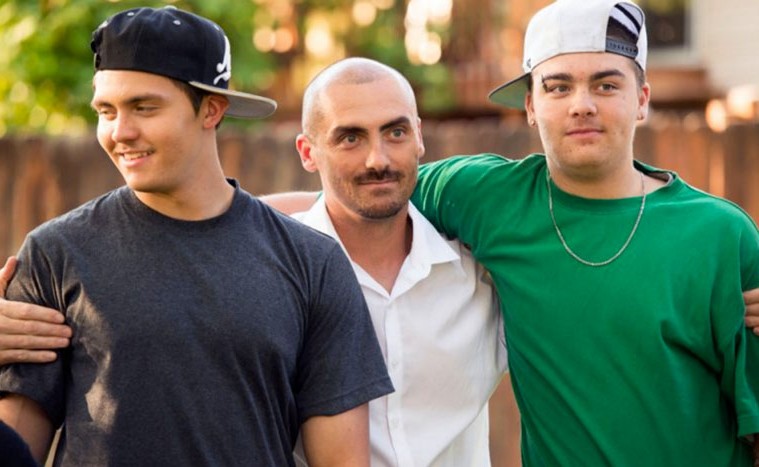 After serving 12 years in prison, Weldon Angelos is a free man and enjoying time with his now teenage children

By The Associated Press

SALT LAKE CITY — A Utah music producer who was ordered to 55 years behind bars for bringing guns to marijuana deals has been set free, after 12 years in prison and national outcry over the mandatory minimum sentencing laws that forced a federal judge to impose the lengthy term.

Weldon Angelos, 36, was freed Tuesday. He says he kept his release quiet for a few days because he wanted to spend time with his three teenage children, who were much younger when he was sentenced in 2004 at 24.

“It’s amazing,” Angelos told KUTV-TV on Friday at his home in Sandy, a Salt Lake City suburb. “I just keep hugging them every time I get a chance.”

His lawyer says the prosecutor who charged Angelos was eventually crucial in getting his release.

Angelos founded Extravagant Records in Utah, producing hip-hop and rap music. He had no criminal record before he was convicted of selling $350 worth of marijuana to a police informant three times.

Prosecutors said he was a gang member who carried a gun during two of those deals, though he was not accused of using or showing a weapon. Angelos denied being in a gang and having a firearm, but police found several guns while searching his apartment.

He was convicted in federal court of 16 counts of drug trafficking, weapons possession and money laundering.

The penalty for possessing firearms during a drug transaction carries a mandatory minimum sentence of five years for the first offense and 25 years for each subsequent deal. The federal system does not have parole.

Former federal judge Paul Cassell said he was troubled by the 55-year sentence he was required to hand down.

“I thought the sentence was cruel, unjust, and irrational,” Cassell told KUTV. “Everybody in the courtroom knew that was too long for this particular crime.”

Cassell, now a law professor, sent a letter to President Barack Obama in February asking him to commute Angelos’ sentence. It echoed a similar effort in 2013, when more than 100 high-profile figures petitioned the White House, including an ex-FBI director, prosecutors and celebrities.

In the end, it wasn’t Obama that granted clemency. Angelos’ lawyer, Mark W. Osler, told The Washington Post that the move for release came from the Salt Lake City prosecutor who charged Angelos in the case.

“After three and half years of inaction on Weldon’s clemency petition, he is free because of the fair and good action of a prosecutor,” Osler said, according to the Post. “He returns to citizenship because of the actions of one individual — just not the individual I was expecting.”

A spokeswoman for the U.S. Attorney’s Office in Utah didn’t immediately respond Saturday to a request for comment.

Cassell told KUTV that he hopes for changes in the law “to make sure these kinds of injustices don’t occur more frequently.”

Meanwhile, Angelos said he’s making up lost time with his family and is not sure about his next steps.

“There’s just so many things I could do,” he told Salt Lake City-based KSTU. “I’m just going to take it easy, and relax for a couple weeks and see what happens.”