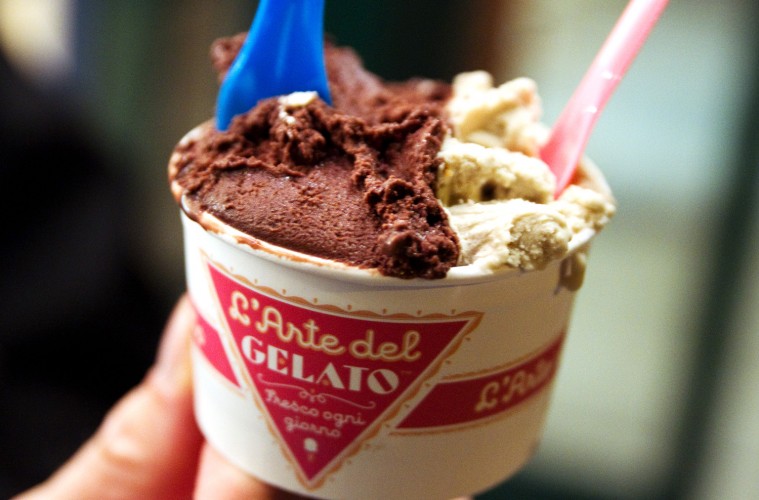 Is Ice Cream the way forward for legalization in Italy?

Anyone who has ever spent time in Italy knows that the country has some of the most draconian drug laws in the western world. When I studied abroad in Florence, for example, it took nearly a month to find anything to smoke.

After loitering in every town square and asking every bartender in both English and my school Italian where some hash (flowers are largely unfindable for tourists in Europe) could be found, but no one seemed willing to help an unproven Americano find “drugs.” Finally, after four weeks, tumbling out of a bar at midnight, a Moroccan angel on a deliveryman’s bicycle rolled past and muttered the beautiful words: “Hashish hashish. You want? I have. Very good.”

He tried to make us go to an apartment, which we flatly refused despite his insistence that carabinieri were everywhere, and then he finally and very nervously sold us 150 euros-worth of hash in an alcove near the library. It was an ordeal, and one that perfectly reflects Italy’s sotto voce cannabis culture.

You hear about it from friends of friends, people who saw a woman once by Santa Croce selling joints or heard of an exchange student from Spain who had managed to bring some in his suitcase. But one ice cream shop in the riviera town of Alassio is attempting to take this whispered cannabis culture and bring it entirely above board one tiny spoonful at a time.

Perleco, a gelato parlor in the northwestern coastal area of Italy that borders France, has recently begun selling their “Marley” flavor, which is created using shelled hemp seeds and incorporates cannabis’s strong flavor into the custardy treat.

While the dessert has only trace amounts of THC, and therefore falls within the legal limit of non-intoxicating substances, Perleco hopes that the flavor, which he told CNN took more than a few tries to perfect due to cannabis’s notoriously pungent olfactory profile, will make Italians stop thinking of cannabis as a drug and start thinking of it as an ingredient—first in their food, then in their medical routines, and then in their list of acceptable vices.

Italy’s government is notorious for being fearful of change to an almost comical level. At least, it might be comical if it didn’t often manifest through politicians like Enrico Letta, who said of the first black member of Italy’s parliament that she “has the features of an orangutan.” It would be even more comical if the corruption level of the legislature didn’t make New York’s state senate look like a vaunted house of honor and untouchability. But at long last, after taking its cannabis cues—like so many of its NATO neighbors—from our own policies here in the U.S., Italy seems to finally be breaking away.

In January, cultivation of medical cannabis was decriminalized by law, a step which legalization advocates hope is the first along a road to eventual adult use laws. For violating growing practices in the medical cannabis field, penalties have been reduced from custodial sentences to fines, and though growing for recreational use remains illegal, the breakthrough represents the first significant pro-cannabis legislation in the country, and one that could create an entirely new outlook for cannabis in Italy.

If endeavors like Perleco’s cannabis flavor continue to think outside the box in terms of changing minds and winning hearts continue to come alongside the slow march of governmental change, it’s entirely possible that Italians could enjoy legal cannabis before some Americans.