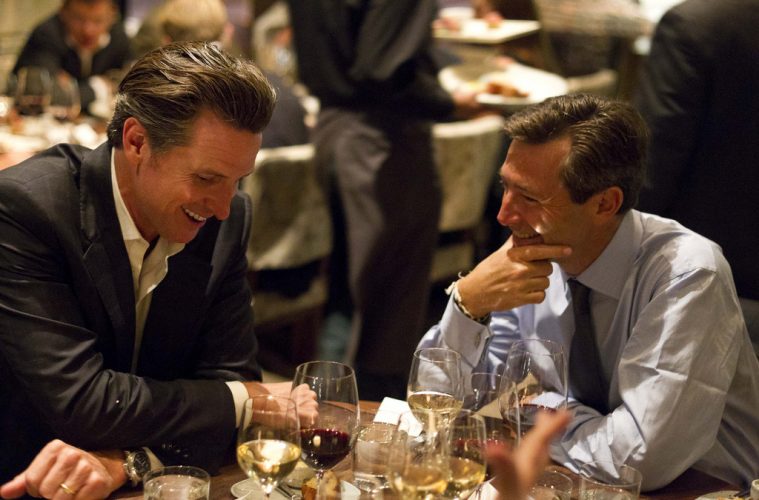 he fundraising dinner for Gavin Newsom in Salinas was in most ways a typical night for a political candidate. Local business leaders paid up to $5,000 for a chance to talk with the man aiming to be California’s next governor over cauliflower bisque, strip steak and Meyer lemon pudding cake.

The hosts that March evening were in the agriculture business, in a region known for its lettuce, grapes and strawberries. But they left their signature dish off the menu: candy infused with marijuana.

California will soon have open sales of recreational marijuana, and it needs to decide how to regulate its newest cash crop. Hoping to influence those decisions, the cannabis industry is seeking access to the state’s political leaders.

One candidate in 2018’s open race for governor is actively inviting their support. The industry is responding by following a conventional political playbook and pouring money into the lieutenant governor’s campaign to replace Gov. Jerry Brown.

Cultivators, retailers and others have given Newsom’s campaign more than $300,000, according to a Los Angeles Times analysis of public records. As part of his aggressive fundraising drive, Newsom has become the first California gubernatorial candidate to solicit large sums from the cannabis industry — far eclipsing his rivals.

Though pot businesses’ contributions are only a fraction of Newsom’s $14-million war chest, the cannabis industry’s open pursuit of political influence shows how a once-underground business is becoming a part of the establishment. So far, donors with a tie to the plant have given more to candidates for governor than all other farmers in the state’s agriculture industry combined.

“In other industries there’s an expectation that you’re at the table before legislation is passed,” said Elizabeth Ashford, a former aide to Brown and Sen. Kamala Harris who founded a political consulting service for cannabis firms. “These businesses have evolved to that point.”

California’s next governor will dictate how much those businesses, which produce a good the federal government still considers illegal, can flourish.

Some in the industry see Newsom as a candidate who listens to their concerns and will stick up for them. Although Newsom says he has never smoked marijuana himself, he was one of the first statewide officeholders to support legalization of recreational use.

The host of the Salinas fundraiser on March 3 was Indus Holding Company, maker of cannabis confections such as Toasted Rooster and Crispy Kraken chocolate bars.

Dinner gave way to a roundtable discussion among the 20 or so guests, who raised with Newsom some of the issues affecting their nascent businesses, according to interviews with multiple attendees.

Banking was a major topic that night, they said. Currently, the vast majority of banks and credit unions will not work with cannabis companies, because the federal government considers their revenue illegal. Some operate on an all-cash basis, and most lack the ability to find traditional financing.

A proposal discussed that night would have the state create a special bank that would serve the cannabis industry. Newsom has not taken a public position, but he expressed interest in the idea of a pot bank, three attendees said.

Newsom declined to be interviewed for this story. His spokesman Dan Newman said while there are ‘hundreds’ of creative banking ideas being discussed, the lieutenant governor ‘had not endorsed any one concept.’ Newman added that his boss ‘never discusses’ specific or pending legislation with donors.

Valentia Piccinini came away reassured that Newsom could find a solution. As an investor in cannabis businesses, she said her bank accounts have been frozen in the past. She fears it could happen again.

“All of us feel confident that Gavin will push us through,” said Piccinini, who has donated $20,000 to Newsom’s campaign. “I think he really passionately believes in what we’re doing.”

Newsom didn’t say much at the fundraiser, attendees said, but he listened to donors’ concerns on topics ranging from licensing requirements limiting who can distribute the product to restrictions on the size of marijuana farms.

Grant Palmer, 40, owner of a Santa Cruz dispensary, complained that the state’s new 15% marijuana tax is too high, especially after it is combined with other local tariffs. The tax was created when voters approved Proposition 64 last November and legalized all marijuana sales. Newsom was an enthusiastic supporter of the measure and the new tax.

“He heard me, but I don’t know that he’ll do anything about it,” said Palmer, whose business contributed $5,000 to Newsom’s gubernatorial bid.

Newsom’s campaign committee reported at least $50,000 in cannabis-related donations soon after the fundraiser. In the last year, he’s gathered thousands more, some of it from at least three other fundraising events with the industry.

Donors at those gatherings say they see a parallel between Newsom’s early support for the legalization of marijuana and his stance on gay marriage, which he allowed as mayor of San Francisco in 2004 even though it violated state law at the time. The city issued marriage licenses for two months before the state Supreme Court ordered a halt, and the dispute led to a later court ruling legalizing same-sex marriage in the state.

“He has this history of being a catalyst,” Palmer said.

Newsom further endeared himself to marijuana advocates by touting their cause as the state’s lieutenant governor, a position with no legislative authority that offers little more than a microphone.

In 2015, as he ramped up his campaign for governor, Newsom organized public hearings with a commission of law enforcement, public health officials and academics to develop policy supporting legalization. The commission’s work served as the basis for Proposition 64 and legalizing recreational pot.

That measure, which passed with 57% support, had the financial backing of billionaires such as George Soros and former Facebook President Sean Parker. The campaign for a yes vote pitched the proposition as a safe, progressive reform of the criminal justice system that would raise billions in revenue for government services. Newsom spoke about the need to end the war on drugs as a civil rights issue as he campaigned for the measure.

With those moral questions now settled, state policymakers are set to make a crucial round of commercial decisions. The choices they make will help determine who strikes it rich after the recreational marketplace opens in 2018.

Despite his success raising money from companies interested in influencing those outcomes, Newsom doesn’t have the unanimous support of the pot industry.

Hezekiah Allen, executive director of the California Growers Assn., said the donations to Newsom come from large companies and wealthy individuals hoping to cash in, not the small growers he represents in the ‘Emerald Triangle’ of Humboldt, Mendocino and Trinity counties in the north of the state.

Allen said he worries Newsom will allow large companies to cut out small operators who served the medical marijuana market prior to full-scale legalization.

“There are fierce and cutthroat business practices coming,” said Allen, who supports one of Newsom’s rivals in the race, state Treasurer John Chiang. “We’re pushing to keep craft growers in business.”

Chiang is leading an effort to reform cannabis banking and has likened the current system to the Wild West.

Allen is part of Chiang’s working group debating reforms that could give cannabis companies full access to banks. Despite Chiang’s desire to assist those businesses, he hasn’t received much money from the industry. Nor has Antonio Villaraigosa, who sought to limit the number of medical marijuana dispensaries during his time as L.A. mayor but endorsed the recreational legalization effort shortly before the vote last year.

In its analysis, The Times identified contributions from cannabis companies and individuals who listed a marijuana-related business as their employer. All but $5,100 went to Newsom, the analysis found.

Among the checks Newsom’s campaign cashed were those from proponents of consolidating the industry. The chief executive of one of such corporation, Terra Tech, hosted one of Newsom’s fundraisers. Employees of the company, which aims to scale up cannabis production, have given the candidate $71,000.

Newsom raked in more at an Oakland event organized by Steve DeAngelo, a longtime proponent of medical marijuana and chairman of FLRish Inc, a newly formed company buying up greenhouses and opening dispensaries in a bid to compete more broadly in the market.

There are other signs the cannabis sector is maturing into a traditional lobby.

The Coastal Pacific Political Action Committee was formed in December to fund candidates who support cannabis businesses. Last month, the group held its first fundraiser at a banquet hall in Hollywood.

Jones-Sawyer, a Democrat who represents South L.A., attended the dinner to promote legislation he wrote that would prevent local police from helping federal agents raid marijuana operations that are legal under state law, similar to how some local governments avoid aiding immigration enforcement.

Jones-Sawyer said the attendees included former stockbrokers, lawyers and financiers, many of whom were unfamiliar with the habits and routines of politics.

—Right now, the industry is learning not only what you can or can’t do, or can or can’t say at a fundraiser, but also how to interact with a politician,’ Jones-Sawyer said. ‘This is a brand-new industry. We don’t know where it’s going.’

The invitation to the fundraiser called it a can’t-miss event providing an opportunity for cannabis owners, operators and investors a chance to meet elected officials who ‘will be shaping our industry for years to come.’