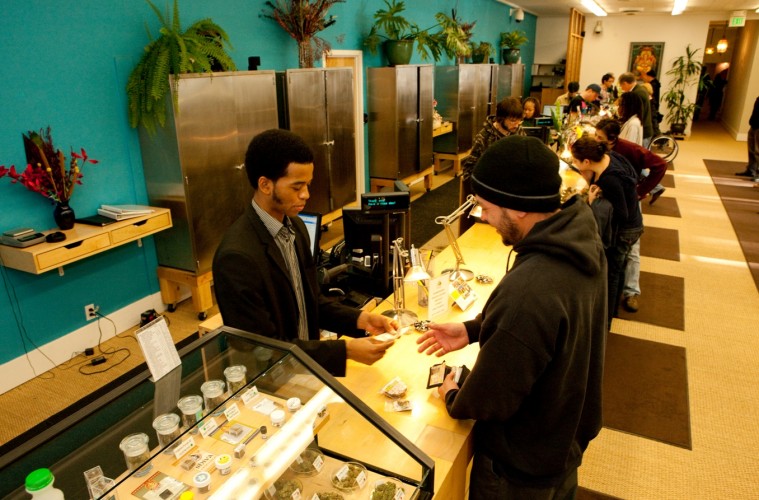 (Note the above photograph is not of Kristina Simpson, just a dispensary pic)

Kristina Simpson says she feels lucky to have landed a job at a Bank Street store where the staff feel like family and customers are grateful for the products she sells.

But when she steps behind the counter at Weeds Glass & Gifts each morning, she brushes aside a nagging fear: Will this be the day police arrive to arrest her for drug trafficking?

It’s an occupational hazard for employees at the city’s 17 illegal marijuana dispensaries.

These days there’s more than the sweet smell of cannabis wafting through the air at the pot shops. There’s chatter about whether Ottawa police will raid the dispensaries, and if so, which ones.

Ottawa police have warned landlords of dispensaries to expect police action if illegal activities continue. Several city councillors want them closed. The news across Ontario is ominous: Nine cities have recently raided dispensaries, following the lead of Toronto, which began a crackdown on pot shops dubbed “Project Claudia” last May.

The “budtenders” like Simpson who sell dried weed, cookies, candy and oils may have the riskiest retail jobs in Canada. Some have been charged with trafficking marijuana and possessing the proceeds of crime after police raids.

Of the 90 people arrested in Toronto’s Project Claudia raids, 80 were “under the age of 30, making 12 to 15 bucks an hour, and doing something they believed in,” said Michael McLellan, the volunteer representative for a coalition of Toronto medical marijuana dispensaries.

Some budtenders chose the job because they are committed to the cause of legalization, said McLellan. Others think it’s cool to work at a pot shop. Many have friends and relatives who use medical marijuana.

“They are helping people and they also think, ‘What’s the big deal?’ at the same time.”

Saddling budtenders with a criminal record is unjust, considering the federal government has promised to legalize recreational pot and medical pot is already legal, he maintains. “Perhaps they are taking risks without considering fully what that means, but they also aren’t going in there with some nefarious motives. I think they should be given the benefit of the doubt. The criminal charges are extreme, under the circumstances.”

Back at Weeds Glass & Gifts, the harsh possibilities seem distant. The shop has a boutique-like feel, with wood floors, an exposed brick wall and neat glass cases filled with dried weed and cannabis cookies, candy, oils and concentrates.

Simpson earns $14 an hour, because she’s the manager.

It’s an amount that can’t compensate her for the lifelong cost of a criminal record or even jail time. And she could earn more as a server in a bar or restaurant, her former occupations.

Why does she take the risk?

Because medical marijuana saved her life, and she wants to help others benefit from it too, said Simpson. She has a gentle manner and was open about her health struggles.

She has suffered from severe anxiety and depression since she was a child, but the crisis didn’t hit until she was in college. She was stressed out, studying, working on the side, drinking too much, and wondering why she felt sad all the time.

“I knew it was a problem when I ended up on the bathroom floor with a razor in my hand.”

After a stint in hospital, Simpson turned to her doctor for help. “Within five minutes I had a prescription for Cipralex.” It was the start of a rocky relationship with pharmaceuticals. “I’m 26. I’ve been on seven different anti-anxiety medications,” said Simpson. All of them had “bizarre and horrifying” side effects, from nausea to the sensation of electrical pulses behind her eyes. They also didn’t help her mood disorder, and she felt herself spiralling downward.

Last winter Simpson wandered into the newly-opened Weeds dispensary on Montreal Road. She was a recreational pot user and had begun to notice that smoking not only made her high — it calmed her mind.

She talked to Weeds staff about the medicinal value of cannabis, and did her own research. “My jaw just hit the ground. I had no idea.”

Soon Simpson was working at Weeds and weaning herself off pharmaceuticals. She experimented with different doses and strains of cannabis.

She now smokes about one-and-a-half or two grams of pot a day. “It’s been like a miracle, almost.”

The stigma against marijuana can be difficult, Simpson said softly, tears springing to her eyes. She hates the “lazy stoner” stereotype. “I don’t smoke to get high. I just smoke to get relief.

“I’ve never felt better. I feel like a human being again.”

All the staff at Weeds on Bank Street are medical users, said Simpson. They take care of each other and the customers. At one point she paused to answer a phone call from a patient who will be arriving in a wheelchair. The store hasn’t installed a ramp yet, but that’s no problem, she said brightly. “‘We’re going to bring out a big piece of plywood for you.”

Medial marijuana is legal, but selling it from stores is not. Patients with a doctor’s prescription can either grow small amounts for themselves, or purchase from a producer licensed by Health Canada, such as Tweed in Smiths Falls. It’s sent by mail.

Many people, including herself, don’t have a doctor who will prescribe marijuana, said Simpson. Others want to see, feel, smell and touch the cannabis in a store, and like chatting with staff.

If a Weeds outlet is raided and employees are arrested, the company will pay for a lawyer to represent them, said Don Briere, the cannabis crusader who is president of the B.C.-based chain of 23 dispensaries.

Many of Ottawa’s dispensaries — seven of the 17 — are run by another B.C.-based outfit that operates stores called Green Tree, WeeMedical and CannaGreen.

Staff at those shops won’t speak on the record, and say they’ve been told not to identify the managers or owners. But half a dozen budtenders have chatted with the Citizen.

Several said they needed the job. “I’m a student, I have bills to pay,” said one employee recently as he served a steady stream of customers, mainly young men. It’s an easy job in a congenial atmosphere, the employe said. He laughed when asked about the possibility of a police raid. “I’ll just jump through the window!”

None of the employees feared being arrested. “At the end of the day, what could they do?” said one, who earns $12 an hour. “I just work here. I don’t own the place. Maybe (police) could hold me for 24 hours?”

Most did not realize that budtenders in Toronto had been charged.  “You mean I could go to jail?” said one employee who also earns $12 an hour. Several said if they were arrested, charges would probably be dropped.

In Ottawa, police say they are investigating the dispensaries. The Prosecution Service has indicated it is willing to prosecute “viable” cases, but dispensaries must be considered individually, not as a group, according to a briefing note from the deputy chief. Police consider whether there have been complaints from the public in deciding which dispensary investigations have priority.