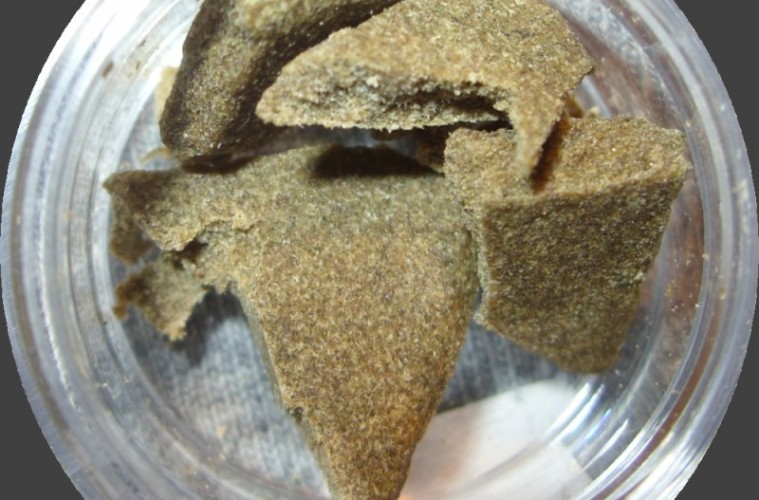 Hashishene: The New Terpene On The Block

Those lucky enough to have smoked real Moroccan hash have undoubtedly noticed its subtle, intoxicating aroma that’s different from any buds or hash you can get in the USA.

On November 28, 2014 a study popped up in the Journal of Chromatography A titledMultidimensional analysis of cannabis volatile constituents: identification of 5,5-dimethyl-1-vinylbicyclo[2.1.1]hexane as a volatile marker of hashish, the resin of Cannabis sativa L. Eighteen months later it seems that the cannabis community has caught wind of a discovery made at the University of Nice Sophia Antipolis in the South of France. The scientists in Nice worked with French authorities to gain access to samples of cannabis and hashish from seizures in an attempt to develop a device that could detect the presence of contraband without the use of dogs. As they analyzed their samples, they found a mysterious peak the chromatogram, a new terpenoid?

Through various experimental methods to decipher the identity of their new product, they were able to conclude that this mysterious peak was a 5,5-dimethyl-1-vinylbicyclo[2.1.1]hexane, a compound that had only ever been detected as a very minor constituent of Spearmint. They found large amounts of this “new” terpene in hash (around 14% of the volatile constituents, or 0.33% of the total mass of a sample of hash) but relatively little in dried cannabis buds.

Up until now, we though all the volatile constituents of cannabis were present in other herbs, making it only the mixture that defines its characteristic smell. For herbal cannabis this is still true, but this newly discovered compound is so unique to hashish their discoverers decided to name it hashishene, but what is hashishene and why don’t fresh or dried cannabis buds have as much or any of it? The answer lies in the hash production process.

Smuggled by the ton from Morocco to Spain and then the rest of Europe, Moroccan hash is the product of choice for much of Southern Europe, and many people prefer its mellow high to that off actual cannabis. Farmers in the Rif Valley of Morocco sow a yearly crop consisting of many different varieties of cannabis, many of which produce copious amounts of CBD, hence the mellow high from the hash it makes. The Sun dries these plants on the rooftops of the same shacks they use to process and package all their material. The unique, landrace strains, the rooftop drying and the hash production process all culminate into a slightly sticky, sweet-smelling substance known in Spain as “pollen” if it’s dirty-blonde and crumbles, or “paki” if it has a play-dough consistency along with a darker color.

The scientists at Nice predicted that beta-myrcene, the most abundant terpene in cannabis, degrades to form hashishene in the presence of light and oxygen. Presumably the rooftop sun-drying exposes beta-myrcene to enough ultraviolet to oxidize beta-myrcene to hashishene in high amounts. Since most growers in the United States abide the rules of carefully curing their cannabis and don’t just throw it on a rooftop to cook in the African sun, hashishene is a relatively rare occurrence on this side of the Atlantic in either fresh buds or extracts of any type.

The authors of the paper suggested that many of the minor terpenoids in cannabis are in fact photo-oxidation products of the main terpenoids of cannabis: beta-myrcene, alpha-pinene, beta-pinene, linalool, terpinolene, caryophyllene and humulene. Beta-myrcene made an average of 16.8% of the aromatics in cannabis flowers, and only 4.3% in the samples of hash. On the other hand, hashishene made up 8.4% in the hash, and only 0.36% in the cannabis.

This insight has incredible implications for those who analyze the terpenoid profiles of cannabis; does this mean that many of the interesting notes in cannabis (esters for fruity smells, for example), occur by random happen-stance? As in the case of hashishene, the photo-oxidation reaction requires a special sensitizer compound, meaning something more complex lies behind the formation of these terpene derivatives, a mystery yet to be resolved. The genetic expression of different sensitizers that catalyze certain transformations, and not others, may underlay the aromatic differences we observe between strains.

As always, the cannabis plant never ceases to surprise and amaze. Whether it’s a new terpene or anew cannabinoid, the science will never stop for one of the most genetically diverse living creatures on earth.