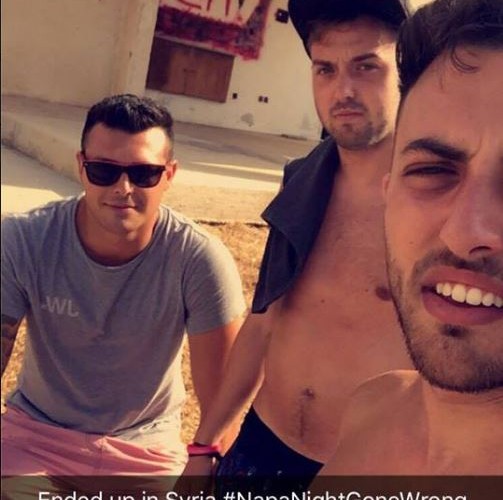 Had to be stoned – British tourists claim they went for night out in Cyprus, ended up in Syria

Three British tourists claim they ended up in Syria after getting the wrong boat after a night out in Ayia Napa, Cyprus

Lewis Ellis, 25, Alex McCormick, 19, and James Wallman, 23, wanted to go dolphin-watching but got the wrong boat – a transfer to the port town of Tartus – they claim.

They said it was only half way through their trip that the club reps realised they were going the wrong way.

Lewis told the news.com.au: ‘It’s the most f**king ridiculous story, isn’t it? We went to watch f**king dolphins and we ended up in f**king Syria.’

He told the Mirror: ‘The last club closed at 7.30am so we just powered through to our 9am boat trip and ended up blagging our way on to the wrong boat.

‘We were wearing boardshorts, hungover, looking like we were ready for a boat party.’

When they saw military police they added: ‘That f**king sobered us up. They took us away and started questioning us; you know, who we were, what we were doing in Syria?

‘When we explained what happened they realised how ridiculous it was and they thought it was f**king hilarious.’

Eventually they claimed they were taken to a naval base and looked after by some Russians, according to LadBible, before a transfer boat took them back.