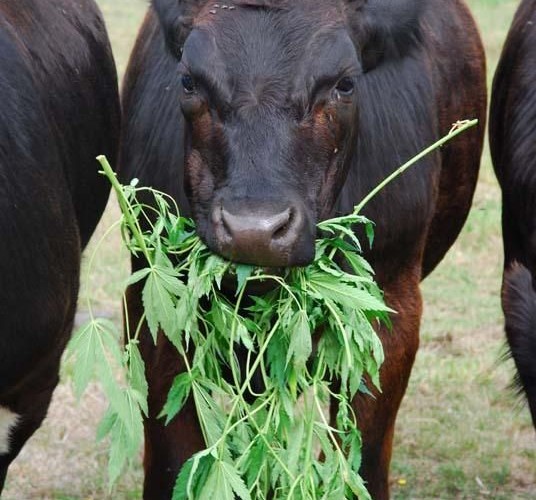 Grass-Fed Beef Coming To a Burger Near You?

With the rise of legalization and acceptance of cannabis, adventurous pig farmers have toyed with feeding their pigs leaves and stems from the cannabis industry. This potentially opens the door for grass-feed beef, chicken and milk—but will these products make it past inspection?

Bacon made from pigs fed small amounts of cannabis flew off the shelves at the BB Ranch butchery at Seattle’s Pike Place Market. Jeremy Gross of Bucking Boar Farms reported that these happy pigs put on more weight than their pork peers eating regular feed, and the bacon they were processed into had a “smooth and mellow” taste.

Since it was advertised as a one-off gimmick, neither the farm nor the butchery ever heard a peep from the FDA or USDA for selling bacon from pot-bellied pigs. Cautious authorities, local or federal, would likely have banned them from adding small amounts of leftover leaves and stems to normal pig feed, citing research that THC can theoretically be passed on to the consumer.

Bucking Boar Farms generally feed their pigs leftover grains from a local distillery, a practice that’s occurred for hundreds of years. Brewers add malted barley, wheat and/or rice to hot water and stir it to extract sugars and certain nutrients in a process known as “mashing,” and then drain off the liquid remaining known as the “wort.” The leftover grains make perfect fodder for livestock because they still contain most of their protein and some starch, but no alcohol because fermentation hasn’t taken place yet. Despite its heritage, the practice briefly came under threat by the FDA but were quickly defeated by vocal cattle farmers and brewers seeking to maintain their mutually beneficial relationship.

The cannabis those farmers added to their pigs’ feed did not supply any nutrients, except perhaps for a little roughage. For Bucking Boar, adding small amounts cannabis was more of an experiment in flavor, as well as testing the psychotropic limits of their pigs. However, other farmers have actually used cannabis to supply nutrition to their cattle, namely in the form of “help seeds.”

Certain varieties of cannabis were breed to produce copious amounts of seeds, and only around 0.2 percent THC in the whole plant. The seeds are rich in healthy omega-6 and omega-3 fatty acids, and have a similar protein content to soybeans and wheat. Studies have shown that chickens fed hemp seeds lay eggs rich in omega-3 fatty acids. Cows fed a diet with controlled amounts of hemp seeds also make energy-rich milk, and lets not forget Bucking Boar Farms which claimed that a little bit of green cannabis trimmings added to pig feed made them put on 20-30 pounds more than the other pigs, and created excellent bacon. Let’s not forget, cannabis leaves from budding, high-THC cannabis still contain 6 percent THC, over 18 times the amount found in hemp varieties.

Despite being cheap and easy to grow, products of hemp-seed-fed, or cannabis-fed, animals have remained in boutique butcheries and organic supermarkets. Why? In addition to the fact that the United States grows very little hemp, many cattle farmers are skittish about using a feed that the European Food Safety Authority (EFSA) has declared unsafe. Even before the EFSA banned hemp seeds for cattle feed in 2011, they banned Swiss farmers from allowing their cows to graze on natively-growing Swiss hemp.

A long sequence of approximations has led the EFSA to determine that even small amounts of hemp leaves or hemp seed added to cow feed can accumulate enough THC in the milk they produce to pass it along to the consumer. While their conclusion may not be incorrect, we must point out that they have no experimental results to show how much THC can pass from hemp seeds (which start out with an average of 0.33 percent THC by mass) to cows’ milk to the humans drinking it. By the same flow of logic, the EFSA also decided that cattle fed hemp seeds is also unsafe to eat, because it might get people even unnoticeably stoned if they eat one too many pork chops in one sitting.

Who knows whether pot-bacon will ever be an everyday commodity or not; perhaps authorities will allow dispensaries to sell it their stores, but maybe a restrictive FDA will push the practice into the shadows forcing it to remain the last vestige of the cannabis black market.