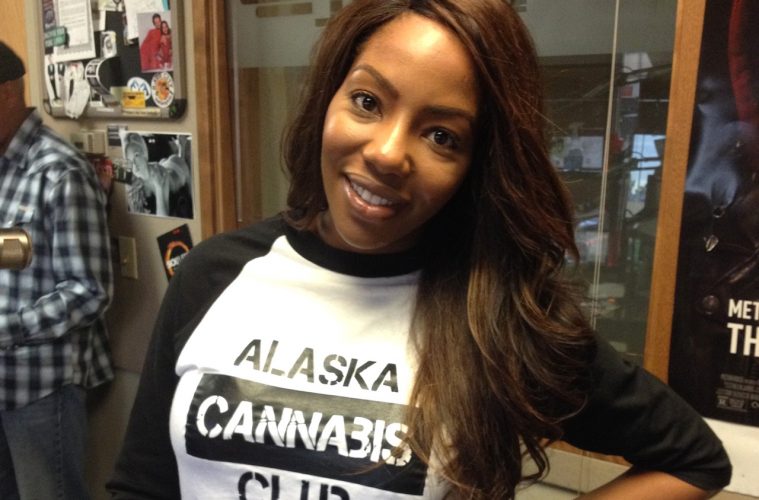 Although reporter turned marijuana advocate Charlo Greene launched into infamy a couple of years ago when she said “Fuck it, I quit” during her final newscast on Alaska’s KTVA, very few people are aware that she is currently at risk of being sent to prison for the next two decades for “misconduct involving a controlled substance.”

Calling her case a “modern day lynching,” Greene, whose legal name is Charlene Egbe, recently expressed concern on her blog over the fact that the entire world seemed to join in to spread the word of her saying “fuck” on live television back in 2014, but very few have stepped up to lend any support for the criminal case hanging over her head due to her cannabis club debacle.

“More than 100 million people around the world watched me quit,” Greene wrote. “And of the now 4,000 members of the Alaska Cannabis Club we’ve served to date, there was literally only one person [at the first court date] to support me.”

Recreational marijuana was made legal in Alaska in 2014 after voters approved a ballot measure with overwhelming support. But despite the state’s new pot laws, which took effect on February 24, 2015, the Anchorage Police Department (APD) has acted as though it does not understand what it means to legalize weed—conducting two separate raids on Greene’s Alaska Cannabis Club in March and again in August of last year.

Greene says all of the APD’s shakedown tactics went against the grain of the law.

“The officers acted outside the scope of the warrant, conducting unlawful body searches on patients, threatening all patients and Club volunteers with arrest if they didn’t consent to taking mugshot-like photos on the scene, destroying cameras, seizing vehicles not included in the warrant and not leaving the lawfully required notice behind,” she wrote.

Unfortunately, the raids have resulted in the 28-year-old being charged with 10 felonies and a number of misdemeanors associated with establishing the club. If Greene is convicted, she could spend the next 24 years of her life in a state penitentiary.

The passing of Alaska’s 2014 marijuana law legalized the cultivation, possession and sale of cannabis, but the state has struggled to put together the regulations needed for the retail market. So, while marijuana has not been legal to purchase from pot shops, the “transfer of up to an ounce of pot” has been considered a perfectly legal transaction.

Greene’s Alaska Cannabis Club used this concept by allowing people to purchase memberships and get their hands on complimentary marijuana when they made a donation. It was this business model that prompted investigators to target the club, sending in several undercover officers over the course of a few months to collect enough evidence to build a case.

Although court records show that Greene was not directly involved with any of the transactions that prompted the raids, prosecutors have gone after her exclusively because they say the club and Charlo Greene are one in the same.

On her blog, Greene, who has pleaded not guilty to the charges, said the prosecutor lied to the grand jury about the business structure of the Alaska Cannabis Club to convince jurors the charges were justifiable. One juror questioned the district attorney by saying, “I don’t understand [defendant] can be held criminally accountable for actions where we don’t see her actions in any of the—in any transactions here.”

But the district attorney assured the jurors that the club is a sole proprietorship.

“The Alaska Cannabis Club is a sole proprietorship. It’s owned by one person. So there’s not corporate liability, the D.A. explained. “So that’s why you’ll notice the charging document is Charlene Egbe doing business as Alaska Cannabis Club. They are essentially one and the same…”

Greene’s trial is scheduled to begin within the next few months. She hopes some salvation will emerge from the cannabis community and help bail her out of this unfortunate situation.

“I need support now more than ever,” Greene told HIGH TIMES. “I dedicated my life to fighting for the cannabis plant and the people behind it. Now that I could lose the rest of my life because of cannabis, it feels like the people I fought for have abandoned me. I’ve never felt more alone.”