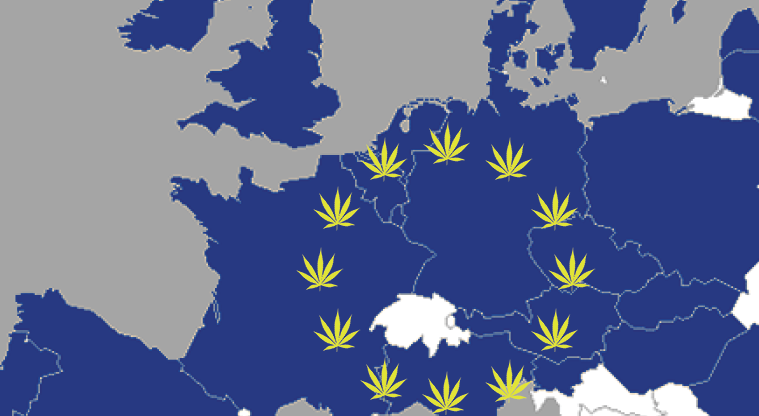 Europe Spends Over $10 Billion on Cannabis Each Year

According to a recent report by a joint EU watchdog, published on May 24, 2016; Europeans spend a colossal 24 billion euros ($26.8 billion) on illicit substances which, according to the report, fund crime syndicates and terrorism and“are one of the key threats to the security of the EU”.

The largest proportion of this expenditure goes to cannabis, which makes up 38% of the illegal drug market in Europe. That amounts to 9.3 billion euros ($10.4 billion). The majority of this cannabis is grown within European borders.

This data is presented in the key findings of the 2016 EU Drug Markets Report. The report brings together knowledge and understanding of the operation and structure of the drug market within the broader context of illicit drugs in the EU.

It was funded by the European Commission and was written by The European Monitoring Centre for Drugs and Drug Addiction (EMCDDA), based in Lisbon, Portugal and Europol, the European Union’s law enforcement agency headquartered in The Hague, in the Netherlands.

EMCDDA’s “holistic overview of the drug situation, helping to separate important signals from the ever-present noise.”

Cannabis is commonly available in Europe in two district forms, herbal cannabis and cannabis resin. Reported retail prices for both cannabis resin and herb are now quite similar, typically between 7 and 12 euros ($8-13.5) per gram.

A Rise in Homegrown

Increased cannabis production in the EU in the last 10 years has led to a shift in the market, with domestically produced marijuana becoming more popular, displacing imported resin in many countries. That said, imported resin still remains popular and some herbal cannabis continues to enter the EU from numerous other potential source countries. Domestic production encompasses a range of practices from small-scale cultivation for personal use to major plantations. Although some large-scale cultivation takes place outdoors, intensive cultivation sites are often located indoors or underground, which according to the report “can represent a significant fire hazard.”

Intensive and sophisticated domestic production techniques, together with the availability of high potency strains of the cannabis plant, are likely to have been one of the drivers for the increased potency of both resins and herbal products seen in recent years.

Although data on other forms of cannabis available in the European market is scarce, evidence from elsewhere, particularly the United States, would suggest that there is considerable room for future innovation, especially with respect to edible products, oils or cannabis intended for use in vaporizers. The report seems to be particularly concerned with cannabis oil. “Historically, small amounts of cannabis oil have been available sporadically on the EU market, but recent reports of domestic production involving the use of butane gas from the United States are worrying from both public health and public safety perspectives.” There is no mention of the fact that the illegal status greatly increases this risk, as untrained people attempt extraction methods that could be potentially dangerous.

The report goes on to mention the legality of cannabis in the U.S., “the existence of a large, licit commercial cannabis market in the United States is likely to result in greater product innovation with a possible knock-on effect in the EU”.

The report acknowledges that attempts to close grow shops for their supposed link to “trafficking” does little to combat the issue, as shops just prosper in neighbouring countries or online. “EU domestic production is already supported by both online and ‘bricks-and-mortar’ shops selling products such as lighting equipment, high-potency seeds and resin production kits.… A link between some cannabis ‘grow shops’ and criminal groups involved in cannabis trafficking and sale has led to recent actions in both the Czech Republic and the Netherlands to target this type of business. Such measures, however, may result in the displacement of activities to neighbouring countries or to the online market.”

There is some good news, however: “Some very high-potency domestically produced resins have been detected recently, and commercial production of highly potent cannabis resins in the EU in the future is now a distinct possibility.”

The report highlights a stark contrast between the “benign public image of the cannabis market derived from the activities of hippy entrepreneurs in the 1960s” to the “modern reality”. “Organised crime groups (OCGs) now play a major role in a large cash-generating industry associated with violence and other forms of criminality”.

It outlines that the sheer scale of the cannabis market makes it important for criminal activities at all levels. For example, street gangs are often involved in the retail sale, and sometimes production, and this has resulted in inter-gang conflicts in some European Member States.

Moroccan crime syndicates exploit links with Moroccan communities established in Europe and working in partnership with European groups and have a long-established role in the importation of large quantities of cannabis resin. Spain, the Netherlands and, to a lesser extent, Belgium are major importation and distribution points for the EU market as a whole. These activities continue to result in gang-style violence in some countries. Though the report highlights that, “it is probably the growth in domestic production of cannabis herb that has resulted in most intergroup violence”.

Spain, traditionally the main entry point for resin produced in Morocco, has recently reported increased seizures of dried cannabis flowers, suggesting a growth in local domestic production. Herbal seizures are also increasing in Italy and Greece. In addition, in 2013, Turkey reported seizing 180 tons of herbal cannabis, more than that seized by all EU countries combined, although the implications of these seizures for the EU market are unclear.

Albania is also an important source country for herbal cannabis trafficked to the EU. Some recent interceptions of large consignments of cannabis resin were found moving eastwards along the North African coast. This may signal the emergence of new trafficking routes through southern European and western Balkan countries, with potential links to human trafficking, or to unstable regions of the eastern Mediterranean.

The summary wraps up with a discussion on how “the illicit drug markets are one of the key threats to the security of the EU. Efforts to understand them and the key actors involved are essential for making sound policy decisions that will have a lasting impact”. There is no mention of tackling this by making the illicit licit, a strategy that seems to be working in the U.S. states that have legalised.

The report presents the facts but makes no attempt to outline ways to tackle the situation in a perspective other than cutting off the supply. If 22 million people spend 9 billion euros on something per year, it is not going to disappear and attempts to control it through enforcing prohibition are never going to work. The last 80 years has proven this much. A legal market could not only raise much needed cash, but also go a long way to preventing many of the issues highlighted in the report as “threats to the security of the EU”.