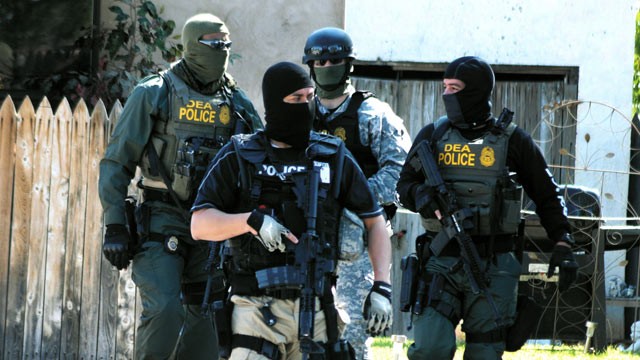 In the Drug Enforcement Administration’s annual survey of the nation’s law enforcement agencies, heroin remained the top concern in 2016 — head-and-shoulders above all other illicit drugs — while marijuana was a drug of negligible concern. Only 4.9 percent of law enforcement respondents named it their top drug of concern, down slightly from 6 percent last year.

Concern or not, marijuana remains illegal for all purposes under federal law, a policy the DEA emphatically reiterated this past summer. To that end, the DEA devoted 22 pages of its Drug Threat Assessment to pot — considerably more real estate than it devoted to, say, prescription painkillers (16 pages), which kill more than 14,000 people per year.

Many of those 22 pages on the idiosyncrasies of state-level medical and recreational marijuana laws, as well as marijuana use trends in legalization states and across the U.S. Most of that information will be familiar to anyone who’s been following the legalization story closely.

However, the DEA makes the interesting claim, not present in last year’s Threat Assessment, that “media attention” to marijuana issues is making it more difficult to enforce marijuana laws and prosecute people violating them. The agency also appears to blame the media for spreading inaccurate information on the legality and effects of marijuana use.

Many states have passed laws allowing the cultivation, possession, and use of marijuana within their respective states. Due to these varying state laws, as well as an abundance of media attention surrounding claims of possible medical benefits, the general public has been introduced to contradictory and often inaccurate information regarding the legality and benefits of marijuana use. This has made enforcement and prosecution for marijuana-related offenses more difficult, especially in states that have approved marijuana legalization.

Certainly, there’s a fair amount of misinformation about marijuana circulating online. Some overzealous advocates mistakenly believe that marijuana is “safe,” full-stop, or that marijuana is not addictive. The messier reality is that, like any other drug, the use of marijuana comes with a certain number of risks, including the risk of addiction and dependency — even if those risks are generally less severe than the risks associated with, say, alcohol.

But it’s unclear exactly what media reports the DEA is referring to in its Drug Threat Assessment, or what concrete effect those reports may be having on enforcement efforts. The DEA did not respond to a request for clarification from The Washington Post.

To the extent that the public is misinformed on the risks and benefits of marijuana use, some of that misinformation originated with the DEA. The previous administrator of the agency, Michelle Leonhart, famously refused in 2012 to admit that crack and heroin are more harmful than marijuana (the agency didn’t officially reverse this position until 2015).

In recent years, the DEA has attempted to convince lawmakers that non-psychoactive hemp plants could get people high (they can’t) and also seized shipments of industrial hemp seeds, prompting a lawsuit from the state of Kentucky.

The DEA has also repeatedly promoted the notion that marijuana is a gateway drug to harder substances. But that’s not the position of the National Institute on Drug Abuse; the attorney general, whose purview includes the DEA; or of most researchers who study the drug.

In opposing various recreational and medical marijuana bills, DEA agents have testified before state legislatures, sometimes making outlandish claims. In one case, a DEA agent in Utah warned that wild rabbits might develop a taste for marijuana if medical use of the plant were approved there.

The DEA also has a lengthy history of casting aspersions on the idea of “medical” marijuana. Most recently, the acting administrator of the DEA, Chuck Rosenberg, called medical marijuana “a joke.” This statement overlooks an ample body of research suggesting that smoked marijuana is an effective treatment for ailments like chronic pain and muscle stiffness. Researchers also say smoked marijuana holds promise for treating PTSD in returning soldiers, and studies have shown that medical marijuana availability reduces reliance on deadly opioid painkillers.

Misconceptions like these have driven the federal government’s 40-year war on marijuana, which has resulted in the drug’s classification in Schedule 1 of the Controlled Substances Act for that time period, alongside heroin.