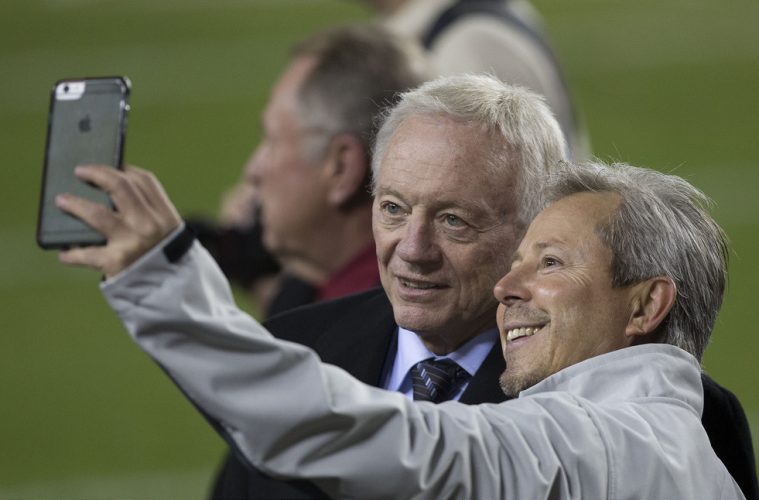 What a fun little way to refer to AT&T Stadium is now becoming true of the NFL as a whole. It is, increasingly, becoming Jerry World.

Just look at the recent owner’s meeting in Arizona. The Dallas Cowboys’ owner, in an owners-only meeting, Jones reportedly raised several significant topics near and dear to his heart, including lifting the NFL’s ban on marijuana use, ending off-the-field investigations and the future of Commissioner Roger Goodell. And that was the subtext. The story of the meetings was the approval by owners of the Raiders’ relocation to Las Vegas, a move that Jones engineered.

Details of the meeting, an executive session of the Finance and Compensation Committees, were reported by Pro Football Talk’s Mike Florio, who described it as “unusual but not unprecedented.” It’s a not-so-surprising move by a man that one NFL owner described to the Bleacher Report’s Mike Freeman as “the most influential owner in all of sports.”

Jones wants the league to lift its ban on marijuana use, but any change in the league’s policy would have to be negotiated because it is part of the collective bargaining agreement with the NFL Players Association, which has been considering a “less punitive” approach to dealing with marijuana. The union’s pain management committee has been separately studying the issue of marijuana use as a pain management tool and whether that should be permissible.

Jones also raised the idea of ending investigations into off-the-field behavior, which seems far more unlikely. An NFL spokesman told Florio that the league is committed “to pursuing investigations that are relevant and meaningful.”

The NFL’s position arises from the 2014 public relations crisis stemming from its poor handling of domestic violence incidents. Ezekiel Elliott, the Cowboys’ star running back, presently is under investigation by the league over an assault allegation, one that is, according to Jones, groundless. Under the new policy, players can be punished without being convicted.

Jones has maintained all along that Elliott has done nothing to merit punishment. “I don’t want to get ahead, because that’s obviously somebody other than me, but I’m well aware of all of the circumstances involved there and have felt good about it since training camp. And have seen nothing that in any way would make me think any differently than we felt shortly after it became a point,” Jones said in a January radio interview.

“I’m just aware of all the circumstances here. I would want our fans to know that I’m very aware of all the facts and the details and been aware of it since training camp and not one thing has come up or surfaced that in any way gives me any concern that I actually to my mind put to bed at training camp.”

Also on Jones’ agenda was the commissioner’s next contract and a succession plan, according to Florio, even if there no reason to think that Goodell, 58, won’t be on the job through the next set of labor and TV negotiations. The collective bargaining agreement expires before the 2021 season and the broadcast deals run through 2022. Goodell is under contract through 2018.

Jones suggested that all owners be involved in the handling of Goodell’s next contract rather than just the Compensation Committee in an effort to, as Florio put it, come up with a deal that “would result in terms more favorable to the league.” Goodell, who was named commissioner in 2006, has made over $150 million in the job, by Business Insider’s tally. The league no longer publicly shares his annual salary, having given up the tax-exempt status of the league office.

If Jones’s meeting seems cheeky, consider that he has, as Freeman writes, “pulled the NFL’s version of a Jedi mind trick.” Legends, the hospitality and marketing company he owns along with the Steinbrenner family and others, helps the Raiders, Chargers and Rams run their businesses better and make more money. Legends will sell suites and sponsorships for the Vegas stadium, along with what may well be the largest naming-rights deal) and will do the same for the Rams and Chargers in Los Angeles and for the Falcons in their new Atlanta stadium. In addition, Legends sold out the suites and sponsorships for the San Francisco 49ers’ Levi’s Stadium in Santa Clara.

“Jerry was once vastly underestimated,” an unnamed marketing official told Freeman, “but is now both feared and respected.”

Jones, Freeman writes, “isn’t alone in wielding influence around the NFL, but he is unique in how open he is about everything he does. Other owners prefer to remain in the shadows. But with Jones, there’s no slinking around. He is up front about who he is and what he wants.”