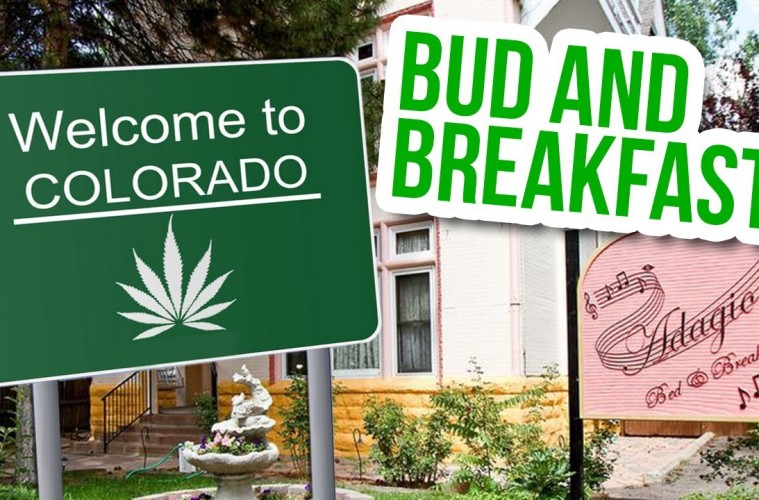 A bed and breakfast in Colorado owned by Joel and Lisa Schneider is pretty typical. It has home cooked meals, a fireplace and a lovely dog that likes to sleep in the corner. It does have one difference however, a host of different marijuana strains and plenty of things to smoke them out of.

Since Colorado legalized marijuana, people have been coming far and wide to stay and the Schneiders ‘Bud and Breakfast’, because it’s still illegal to smoke weed in public. Most hotels ban all types of smoking, so many tourists were free to buy, but had nowhere to smoke, that’s why the Schneiders started their own b&b to cater to these new tourists.

Joel and his wife Lisa took over a tradiytional B&B in April 2014, and have since opened 2 more due to their popularity.

“It’s not fun sitting by yourself and smoking,” Lisa added. “It’s fun to be with other people and talk about what you bought at the dispensary”.

The B&B has 5 rooms, all named after members of the Grateful Dead, Joel being a lifelong Deadhead, you’ll regularly hear their tunes playing at the hotel.

The Schneiders don’t sell any marijuana though, sometimes they give away a free sample or two, depending on local ordinances and what they are allowed to do.

A recent survey from the Colorado tourism office showed that nearly half of the tourists who visited the state said legal marijuana is a factor in their chosen destination, and with more than $18bn being dropped by tourists in Colorado in 2014, there is a strong incentive for lawmakers to find an agreeable (and taxable) solution to the problem of tokers without a home.

We think more Bud and Breakfasts are bound to pop up all over the US as more states legalize, and people want to fill a niche left by laws that are trying, but not quite keeping up with the times.