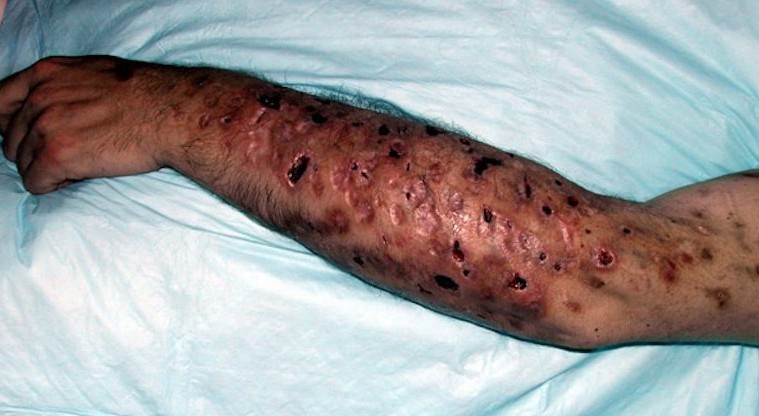 Beware Of Rare Cannabis Disease That Causes You To Lose Limbs

Cannabis Arteritis. An incredibly rare cannabis related disease, for the first time a man in Australia has been diagnosed with it.

A 26 year old Australian man who had been using cannabis daily has acquired the rare condition that prevented a wound on his big toe from healing. He smokes 1 gram of cannabis a day and was sent to the hospital when one of his limbs failed to stop bleeding.

Surgeon David Soon diagnosed the man with ‘cannabis arteritis’. The man’s daily use has caused a build up of plaque around the blood vessels in his big toe.

Cannabis is a ‘vasodilator’ which causes the blood vessels in your body to widen, this relaxes the walls of the arteries, resulting in lower blood pressure and increased blood flow to the arteries.

The additional blood flow increases the amount of plaque that deposits itself around the walls of the artery. This narrows the artery and increases pressure and resistance.

Cannabis arteritis is a very rare condition that results in lesions that leads to ulcers or other problems.

What is Cannabis Arteritis

The main causes of arteriopathy in young patients include drugs, metabolic diseases, pseudoxanthoma elasticum and Buerger’s disease. Arteritis due to Cannabis indicawas first reported in 1960, and the role of this drug as a risk factor for arteritis was confirmed in several subsequent publications. A 38-year-old smoker with no previous contributory medical history except for long-standing cannabis abuse developed a dry necrotic lesion of the left big toe. Imaging examinations revealed proximal arteriopathy of the lower limbs that predominated on the left side. He had no atherogenic or thrombogenic risk factors, and no signs of pseudoxanthoma elasticum were found. Remarkably, the development of arteritis paralleled cannabis abuse. The course was slowly favourable after weaning from the drug, vasodilator treatment and hyperbaric oxygen therapy. Despite some subtle clinical differences (more proximal than distal involvement), cannabis arteritis may be considered as a particular form of Buerger’s disease, where cannabis, along with tobacco, seems to cause arterial lesions. Along with the noxious effects of cannabis on vessels, a role for contaminating arsenic is also possible. Cannabis arteritis is not widely known, but may prove not to be so rare if one considers consumption of cannabis besides that of tobacco.

At it’s worst, cannabis arteritis can lead to limb amputation. If caught early enough, the disease can be treated with balloon catheters. But patients still need to take aspirin for the rest of their life.

“Although this is a rare condition, this illness should be known and made aware to physicians around Australia,” Soon said.

If you’re a daily cannabis user, make sure you know the signs of this rare disease. Cannabis arteritis mostly affects men. The most common symptom was bleeding toe wounds that wouldn’t heal.

Surgeon Soon warned that medical professions should make sure to be especially alert for the condition. Since medical cannabis has recently been legalized in Australia, Soon worries the disease will become more common.

“Due to the increase in cannabis usage and the legalization of medicinal marijuana, awareness of this condition is critical and may become a growing problem in the future,” Soon told Stuff NZ