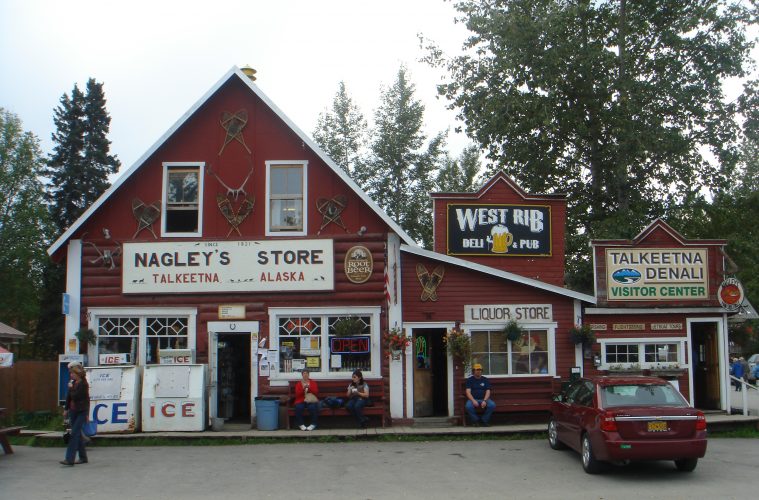 The presence of a marijuana retail store has caused a deep divide in this quirky tourist town, where hundreds of visitors roam the streets daily browsing in art galleries and souvenir shops housed in historic cabins.

Most of Talkeetna’s stores line the two long blocks that make up its Main Street, where tourists – many who arrive in Alaska on cruise ships and are bused about two hours north from Anchorage – wander into storefronts like Nagley’s General Store for ice cream or slip through its back door for a cold one at the West Rib Bar and Grill.

At Main Street’s opposite end, near a river park where visitors snap photos of the continent’s tallest mountain, is Talkeetna’s newest venture into the tourism trade. The High Expedition Co. is a nod to the rich mountain climbing history of the eclectic community purported to be the inspiration for the 1990s television series “Northern Exposure.”

Talkeetna’s first marijuana retail store is causing a rift not seen in other tourist-dependent towns in this Libertarian-leaning state, where marijuana had a casual acceptance long before it became legal. But even here, like in many pot-legal states, some towns have opted out of sales, fearful it might invite crime and other evils.

In Talkeetna, some shop owners – the ones who built a multimillion-dollar business from the steady stream of mountain climbers who use Talkeetna as a staging point for treks up Denali – say this one shop could ruin the tiny town’s historic atmosphere and harm business like the eight or so stores that serve alcohol along Main Street could never do.

Joe McAneney co-owns the High Expedition Co., which opened in mid-May. “The sky hasn’t fallen on Talkeetna, the sun is shining, and this is now the most photographed shop in town,” he said.

Grabbing the attention of amateur shutterbugs is a small “Cannabis Purveyors” wooden sign on the store’s deck.

McAneney has been working to open the shop nearly since the day in 2014 that Alaska residents voted to legalize recreational marijuana. He and a partner bought the cabin that was originally built for Ray Genet, an early Talkeetna climber and guide who died in 1979 on Mount Everest. McAneney worked with Genet’s family and has incorporated a small museum dedicated to Genet and Talkeetna’s climbing history. But even that association led to some disdain.

“Small towns in Alaska are harder than anywhere to break into and sort of become accepted,” McAneney said.

His store got its approval from the borough on a technicality when the assembly was writing regulations for marijuana businesses in unincorporated areas, like Talkeetna, and inadvertently omitted special land use districts – like the town’s Main Street. Talkeetna has no local governing body, only a nonvoting community council whose sole power is sending recommendations to borough officials roughly 75 miles (120 kilometers) away.

“There’s people that are upset about it, but it’s legal,” said Sue Deyoe, the Talkeetna Historical Society and Museum’s executive director.

Opposition mounted as the issue went before state regulators, where a stream of residents unsuccessfully called in to the Anchorage meeting to oppose the store’s license.

Among the biggest issue for critics is the lack of places for tourists to puff the marijuana they buy – smoking pot in public is illegal, and that led to fears the nearby river park would become the place to partake.

Alaska State Troopers say there were no citations issued for anyone consuming marijuana in public in Talkeetna from April 1 to July 1, the same as last year.

But opponents argue Talkeetna is lawless, with the closest trooper an hour away. “What are we supposed to do?” asked Stoltz, the bed and breakfast owner. “Are we going to take the law into our own hands? Duct-tape him?”

Stoltz said the very presence of a pot store will harm business in the historic town, where residents make a year’s living between Memorial Day and Labor Day.

“If we lose our tourism, we lose what Talkeetna is,” he said. “We’re not catering to stoner tourists. To me, that’s the conflict with Joe.”

Talkeetna has the artsy feel of a tourist town in Colorado, which also has legal marijuana, he said. “This goes with that vibe, and I think that’s fine.”

One resident dismisses the idea that the pot store is giving Talkeetna a black eye. But it is dividing the town, Christie Stoltz said, noting the chasm has reached her home. She’s the daughter of Mike Stoltz, the B&B owner.

For some, marijuana was never an issue, Deyoe said, and it pales in comparison to a controversy last spring when the borough proposed leveling trees over an area about the size of eight football fields for an expanded parking lot for summer use.

“I think the community council got way more letters on that than they did in reaction to the marijuana shop,” she said.